I just got back from San Francisco as I got pulled out from airport standby to operate on the flight.

I have been to San Francisco once before but was very happy to go again. There is something about it that made me fall in love with the city last time and i have no doubt it will happen again. 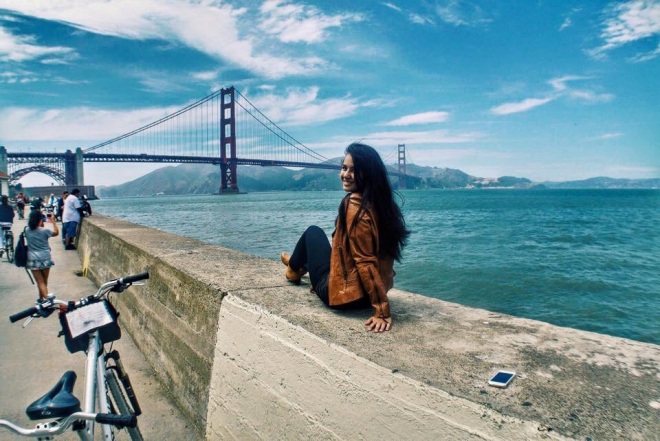 Maybe it was the clear blue sky and crisp, fresh air that Dubai clearly lacks of, or the fog that slowly makes its way over The Golden Gate in the afternoon, or the adorable sea lions who lay and sunbake right in the middle of Pier 39.

Whatever it is, ” I left my heart in San Francisco”. Just as Tony Bennett once did.

However this time instead of getting on the tour bus and making my way around the city, myself and five other of the crew decided to rent bicycles and ride from Pier 39 over The Golden Gate Bridge and down to the sweet little town of Sausilito. 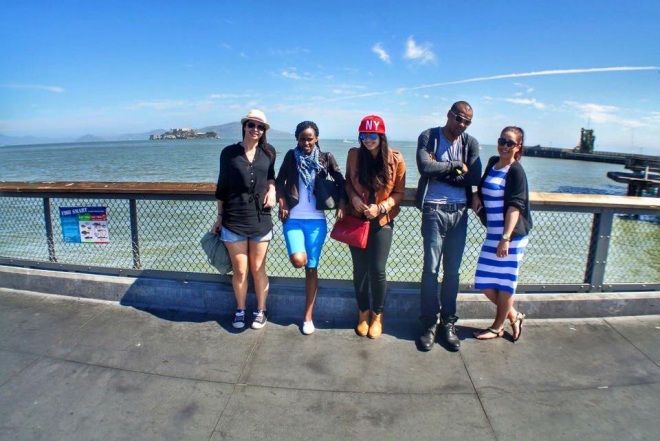 One of the crew and I decided to be a bit daring and tried out the tandem bike.

I’m not going to lie it is a lot harder than it looks especially if you havent riden a bike for a while. But after about 25 minutes of laughter and wobbling around, we got the hang of it. Overall the bike ride took about 3-4 hours bearing in mind that we stopped pretty much every 15 minutes to take photos as the view was incredible, much better than being on the bus.

It did take its toll on us the next day on our flight back to Dubai though. Every time a passenger asked for lamb, I cringed and moaned in pain as I had to squat down to get the lamb at the bottom of the cart.

For those animal lovers out there, every afternoon at Pier 39 you can stand on the wharf and watch the wild sea lions go about their daily routine.

Depending on the weather and their mood you are almost always guaranteed to see more than you would in a zoo and at your own leisure.

Surrounding the Pier are various of little stalls and shops that specialise in gifts, soverniers, hand crafted jewelry and loads of eateries and cafes.

Make sure to stop over at one of the many eateries that are famous for their clam chowder soup. I personally am a bit fussy when it comes to mixing seafood with soup so I wasnt willing to order a whole soup to myself, bearing in mind that it also comes served in a sourdough bread bowl. But not wanting to leave without at least having a try the lovely lady offered my friend and I a taste. With a creamy, yet delicate flavour it was very tasty but quite rich. I know that after a few spoonfuls It would have been too sickening for me to finish. Nethertheless I can tick it off as accomplished! 😉

As the Fishermans Wharf is known for its seafood we decided to have lunch at one of the restaurants upstairs that opened up over where the sea lions camped out. It didnt take much looking at the menu for me to decide what I wanted. That was a huge portion of Clam Vongolie. And it was just as amazing as I hoped it would be. 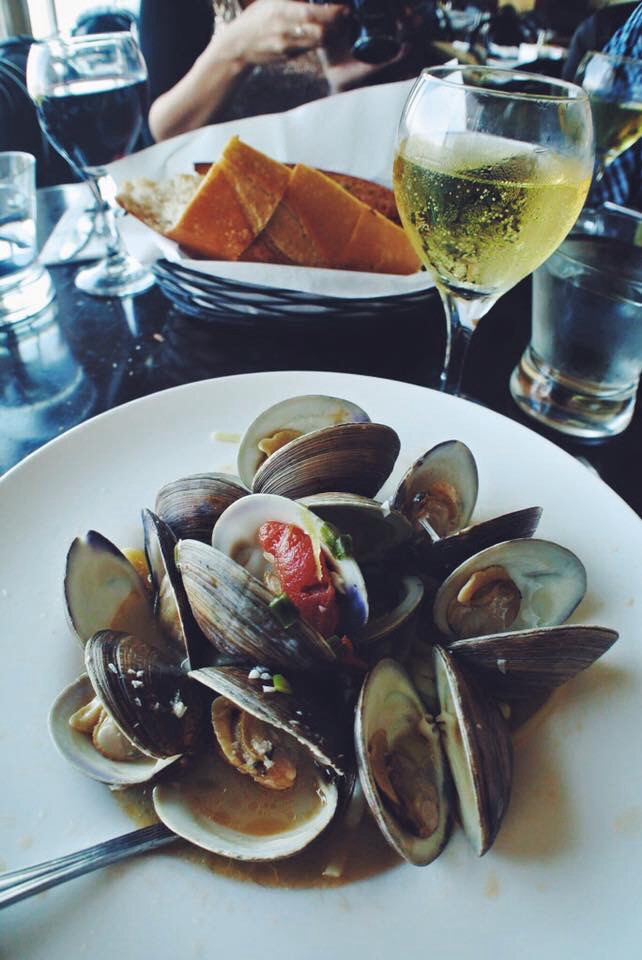 Unfortunately both times I came to San Francisco I didnt get to join the very popular Alcatraz tour that takes you out on a boat to the island that was once home to some of America’s most badass criminals.

Reason being, you have to book the tours online in advance because it is almost impossible to just turn up on the day and get a seat. Hint hint nudge nudge, book in advance.

The Golden Gate Bridge made me forget all about what i had missed out on at Alcatraz as soon as i saw its perfectly assembled orange steel reaching out of the fog at me. The word breathtaking doesnt do it justice and seeing it for the first time was one of those moments where I realised how fortunate I was to be there. It was truly one of the most memorable moments of my life. 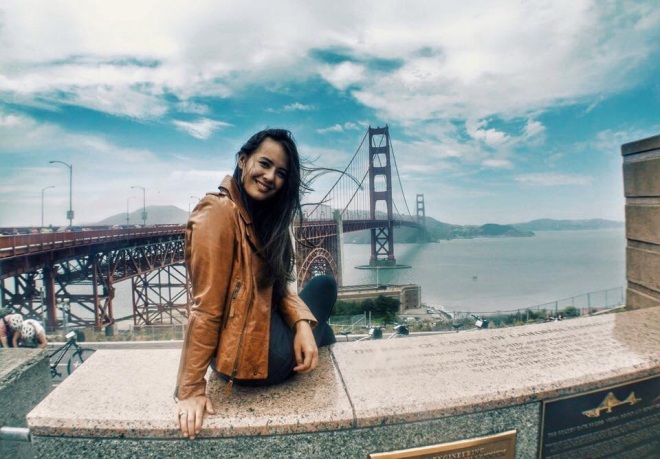 Once we were over the bridge we found ourselves in a beautiful little town that is Sausalito. Situated right on the water and capturing another spectacular view of the Golden Gate, Sausalito has so much to offer.

I recommend stopping for lunch or at least a coffee or two at one of the many cafes and stalls. Or if you are obsessive like me then just take photos … lots and lots of photos. 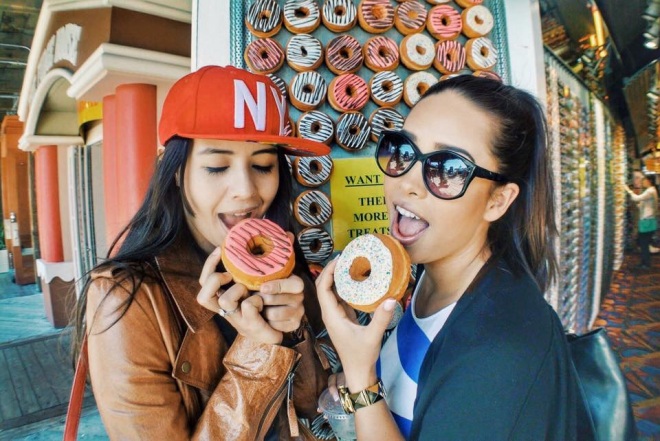 Another thing we learnt the hard way is if you do decide to rent a bike and want to catch the ferry back, be sure to purchase a return ticket before you get there. We had to wait in line for almost three hours with our bikes before we were even at the front of the line.

Before returning to our hotel we ended our trip downtown and came across The Cable Car, an icon of San Francisco. I will warn you though the line is sometimes ridiculous so best to get there early and avoid the line.

Overall if you are planning to visit San Francisco for more than 50 hours I would say plan everything out and don’t pack too much in to your itinerary, otherwise you forget to take in all the city has to offer. Relax, enjoy it and soak in all the beauty.

Unfortunately for us we didnt have a choice because we had to operate the next flight back but it is still at the top of my favourite destinations so far. 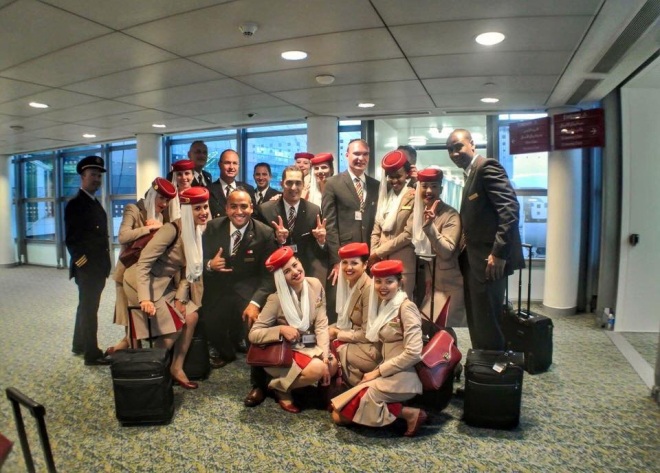 And I cant wait to visit again.

Safe flying! It’s going to be a long 16 hours back to Dubai.