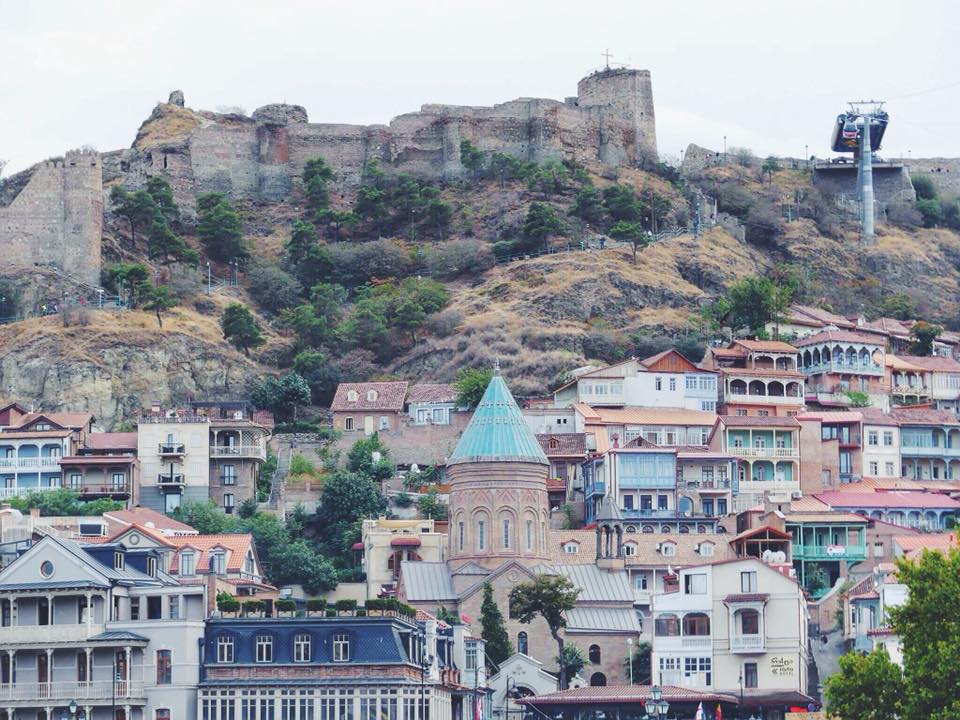 As bad as this sounds, I’ll be honest I had never heard of Georgia before http://worldofcrew.com contacted me on Instagram to tell me that I had won a free two night stay with them. This happened a long time ago now but it took me a while to be able to find time to actually visit them in Tbilisi, Georgia. 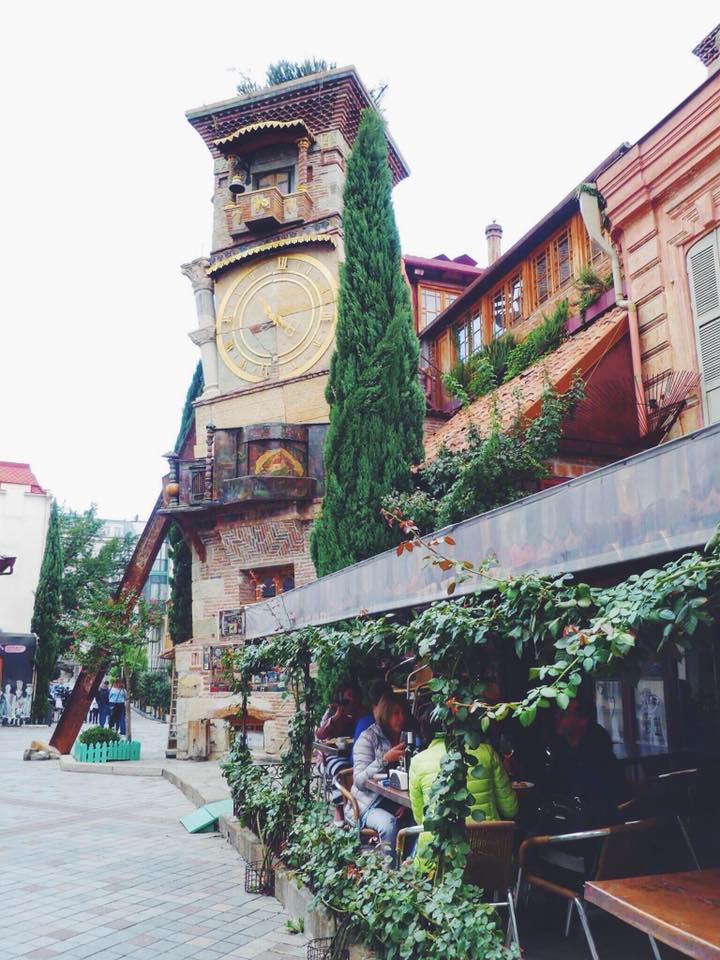 MA and I managed to get five days off last week and so we booked two return tickets with Fly Dubai and flew over to the wonderful Tbilisi. 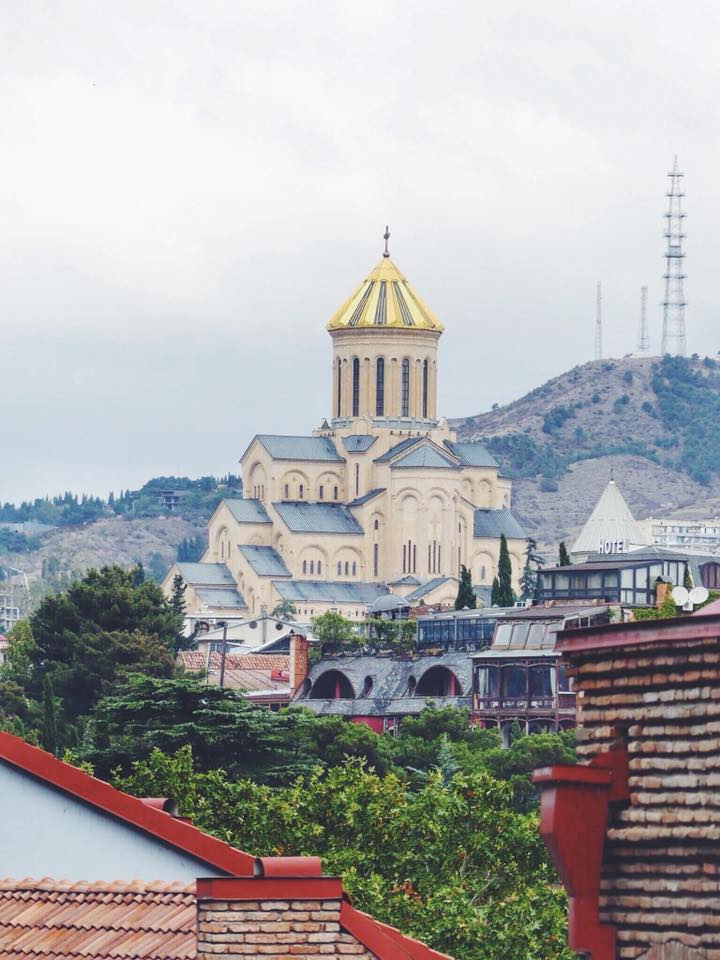 The flight was a quick three hours and when we arrived we booked a taxi through an app called Taxify, this is a must download for anyone visiting Georgia, seriously we used it almost every day.

When we were waiting for the driver we asked the taxis that were lined up out the front of the airport how much it would cost to go to our destination and he said 60 Lari! On the Taxify App it was a mere 16.80 Lari! 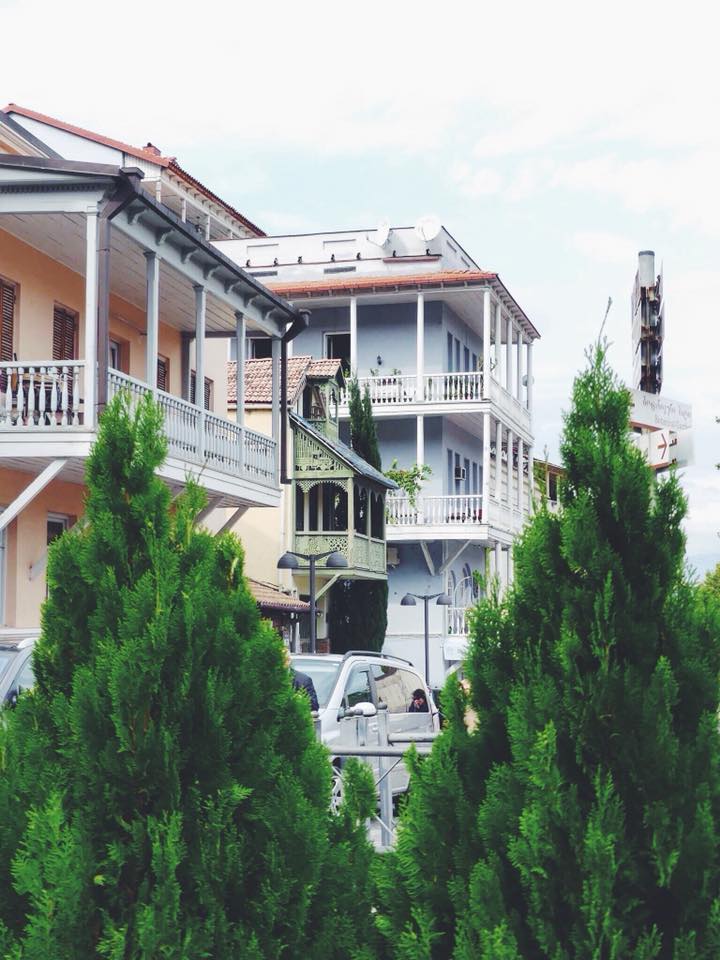 We arrived at the World of Crew house and met the ladies in charge and their adorable cat Patricia, I fell in love instantly! hehehe.

We settled in and then decided to go for a quick walk to the park down the road and check out the surrounding streets. We immediately noticed that Georgians love their art as there was graffiti art and paintings all around the streets and allies. 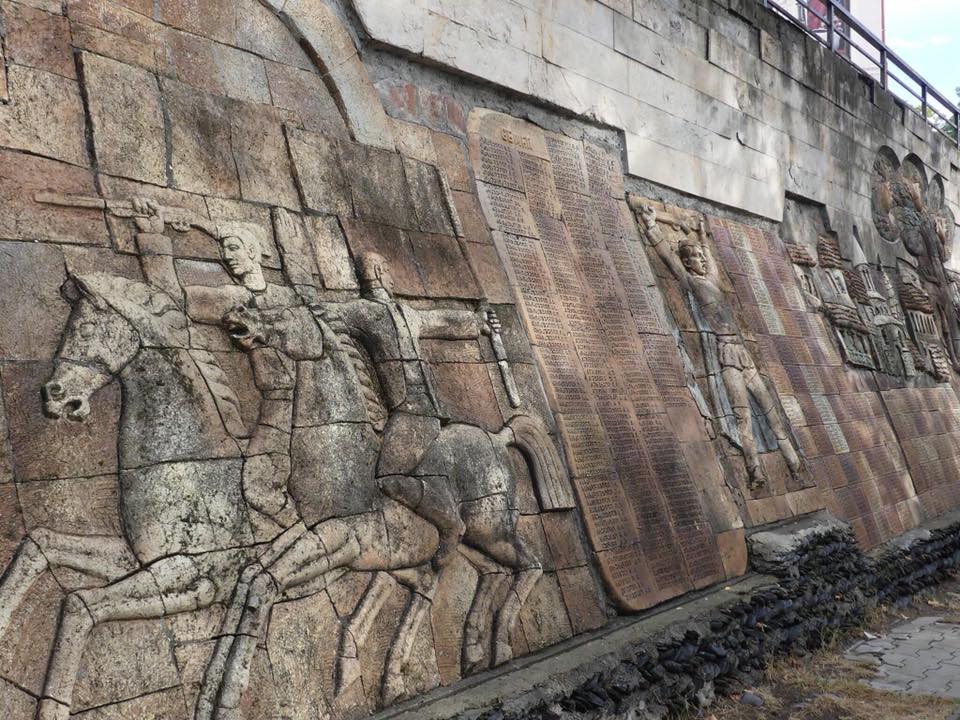 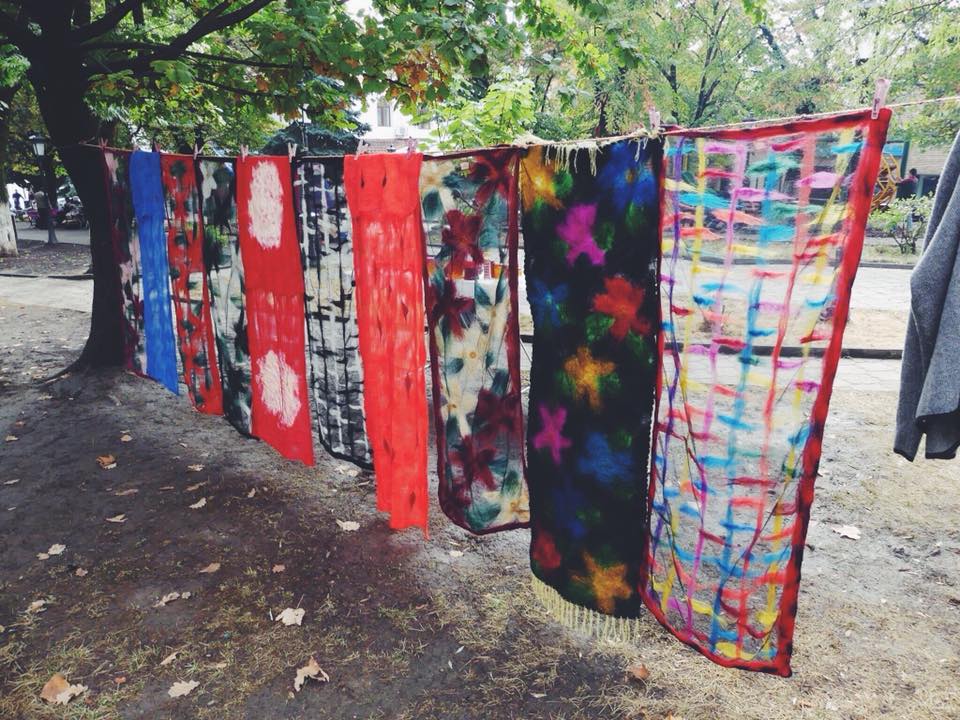 We stopped at a little hole in the wall grocer and picked up some fresh fruit and spices and then headed back to get a good nights sleep before heading down to Old Tbilisi the following morning.

As the driver turned into the streets of Old Tbilisi it was very clear that we were in the ‘Old’ part of Tbilisi. The buildings looked centuries old, with colourful fabrics draping from the balconies and numerous stalls and merchants selling foods, snacks and other bright and colourful goods.

It was so beautiful and I got so excited to be there. We walked up into the streets and strolled through the Georgian Botanical Gardens before heading back down and grabbing a freshly squeezed pomegranate juice. 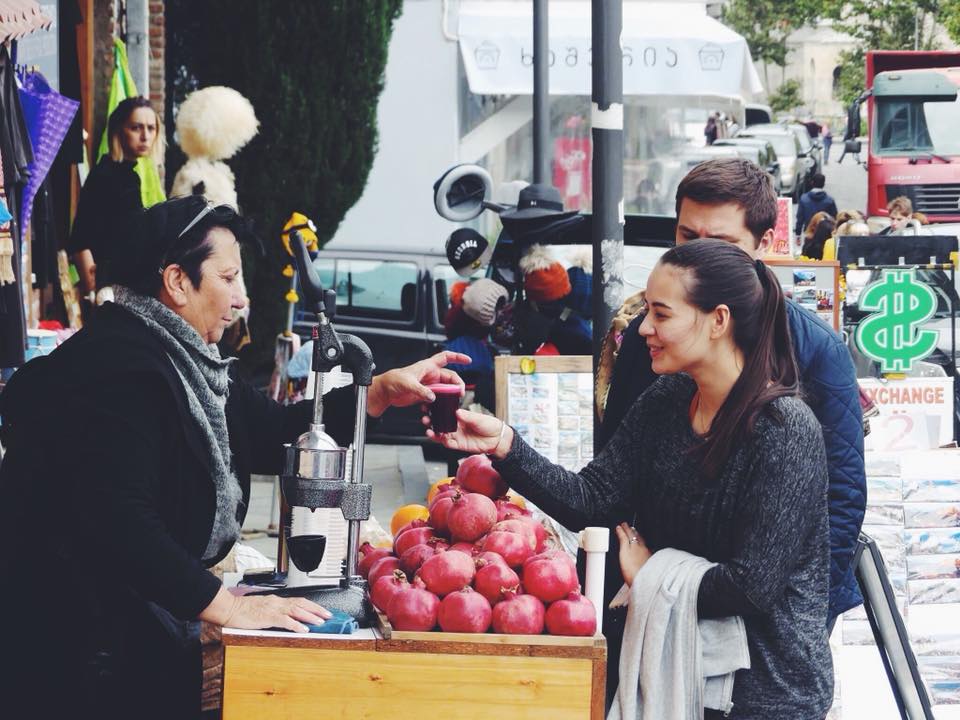 We then walked towards Peace Bridge which is stunning in itself, ( even better at night when the lights are all lit ), met the girls and had a lovely lunch with them.

For those of you who still aren’t aware of what World of Crew is, it’s basically an application that gives cabin crew many discounts and goodies all over the world! Seriously if you haven’t already downloaded it, go and check them out now!

After lunch it was already night time so we decided to hop onto the cable car and go check out the infamous Mother of Georgia. The view from up there is breathtaking especially at night with all the lights and the Mother of Georgia is even more beautiful up close and personal. 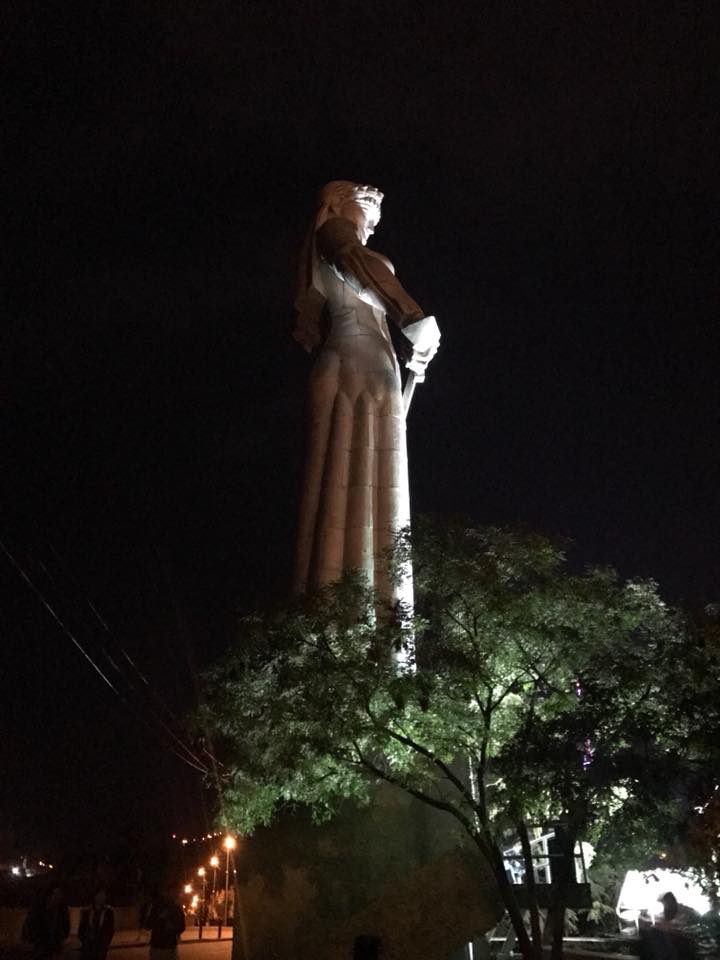 The next morning we met our hilarious tour guide who was introduced to us through WOC of course, his name is Akaki and he is a local Georgian who stayed with us for two days to show us the sights. 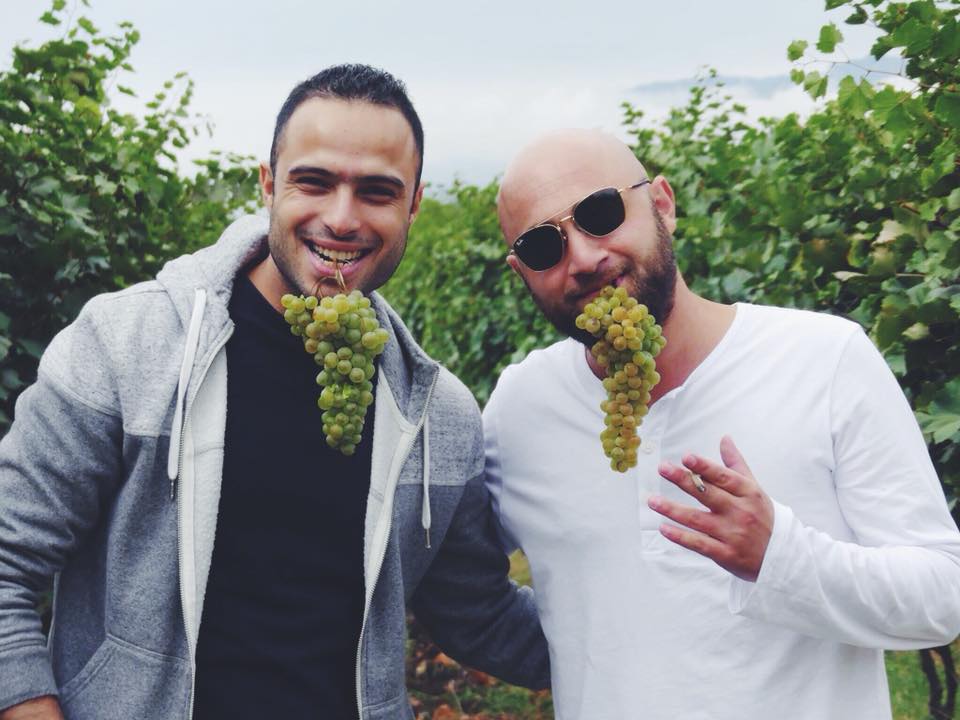 We had breakfast at a restaurant called Alani in Old Tbilisi and we ordered the world famous Khachapuri, which is a Georgian bread filled with melted cheese and an egg on top.

I know the egg might seem a bit freaky to some at first, ( I know it freaked me out! ), but you mix it in with the cheese and then all is good in the world. 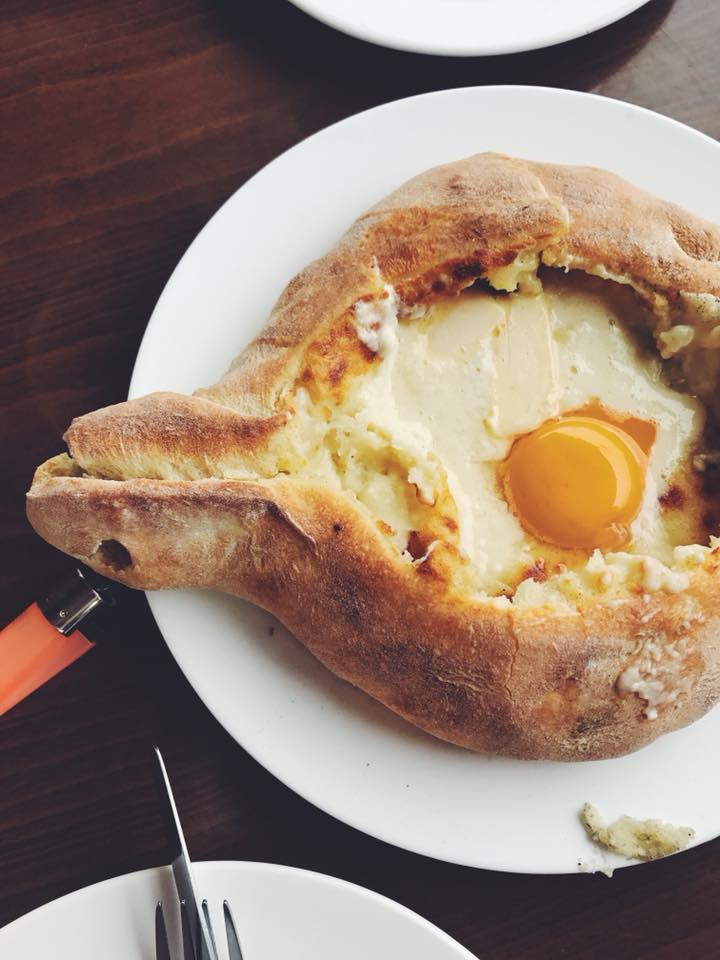 Also just a tip for those trying Khachapuri, you can have it two ways. One with the bread filling intact or the second is to have the bread removed so that it is more crunchy if that makes any sense.

Because we had no idea of the difference we asked Akaki to choose for us so he told them to remove the soft bread filling and seriously guys, make an effort to get your waiter to understand you because it was so much better crunchy and without the insides of the bread. 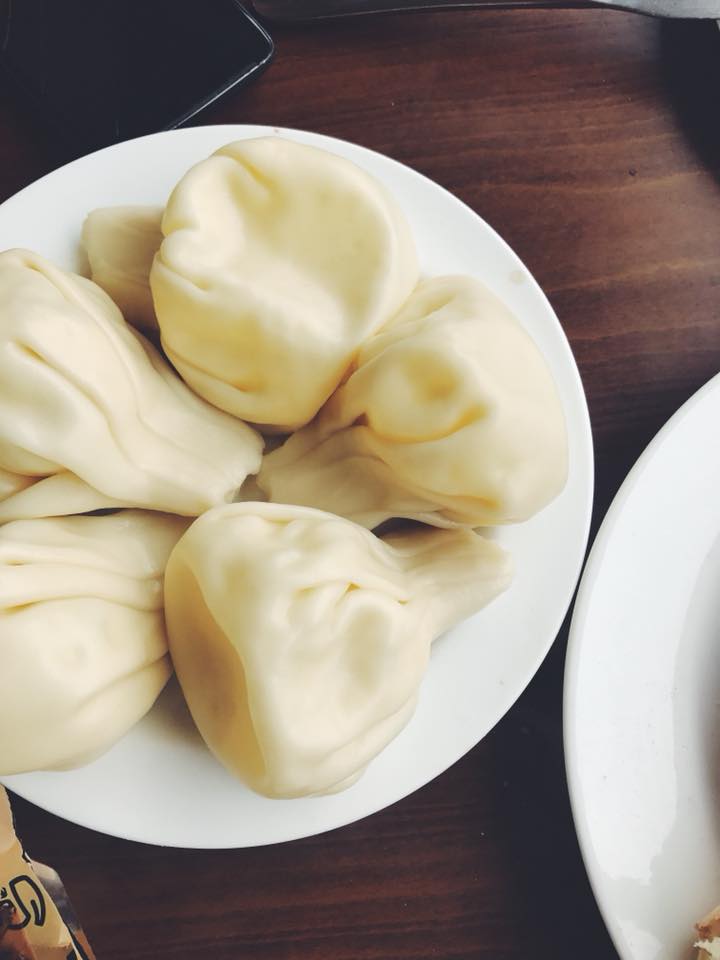 I also ordered five pieces of Khinkali, which is Georgian dumpling filled with meat, cheese, potato and many other things. We chose the cheese one and boy was it tasty!

Not going to lie though, I did have a slight cheese coma that morning so maybe order the meat one if your’e going to have Khachapuri as well or try them on seperate days.

Oh and don’t forget to try the Georgian Snickers below!

Oh and by the way, unless your’e with a local you wont know that there is a certain way to eat Khinkali … First you bite a small hole, blow into the dumpling so that it puffs up to cool it down a bit, suck out the soup and THEN you can finally eat it. 😉

It took us around two hours and a half to reach Signaghi and we stopped many times along the way, our first stop was at one of Akaki’s friends vineyards.

It was harvesting season so everyone was out and about harvesting the grapes and transporting them to the local wineries to be made into wine. We got to harvest a big bag of our own and yes they were delicious!

One thing I noticed quickly is that once you travel into the countryside, the lands are filled with fruit trees and other crops. We got to try grapes, blackberries, apples, plums, figs and so much more!

When we arrived into Signaghi, which is also known as ‘ The City of love’, MA and I hopped onto the back of a small four wheeler vehicle and buzzed around the city centre to check out the views and colourful houses. The small city is filled with rustic streets and old city walls that once protected Signaghi from other invaders. 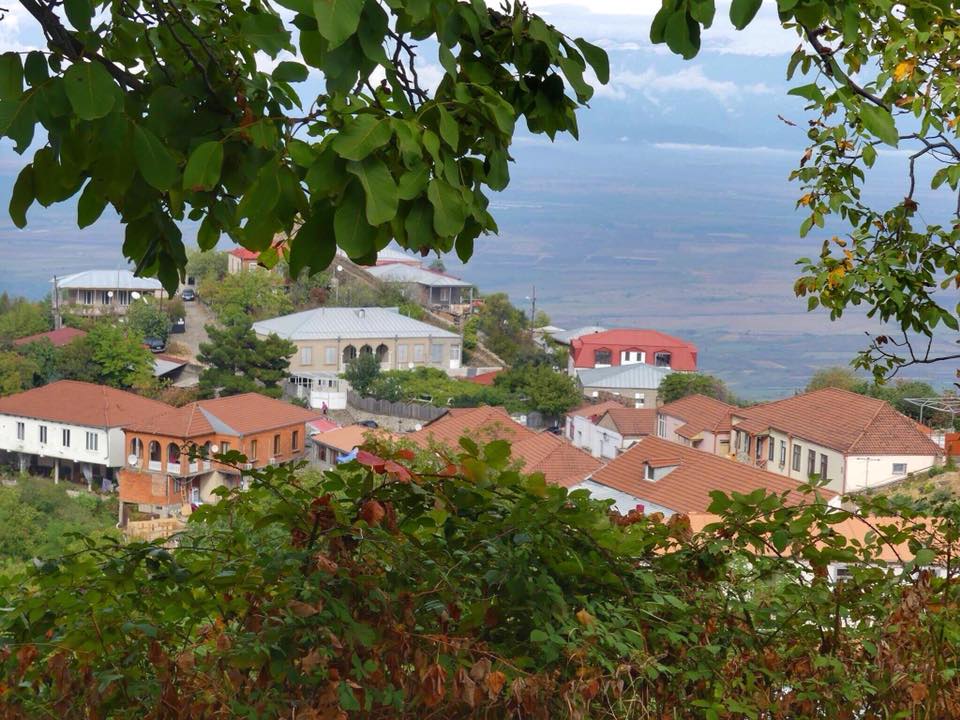 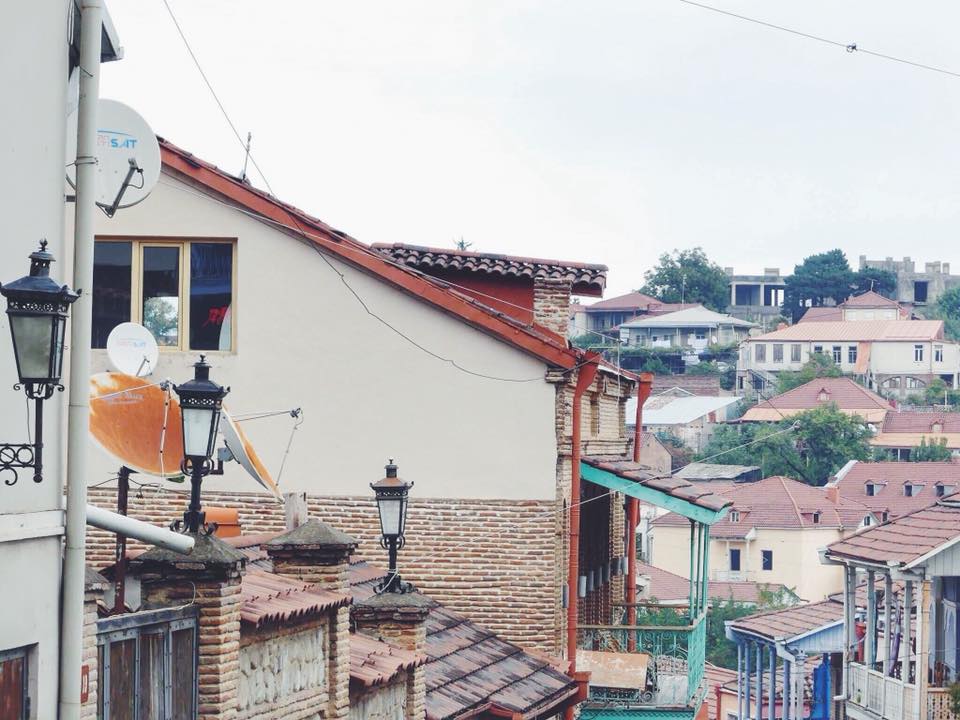 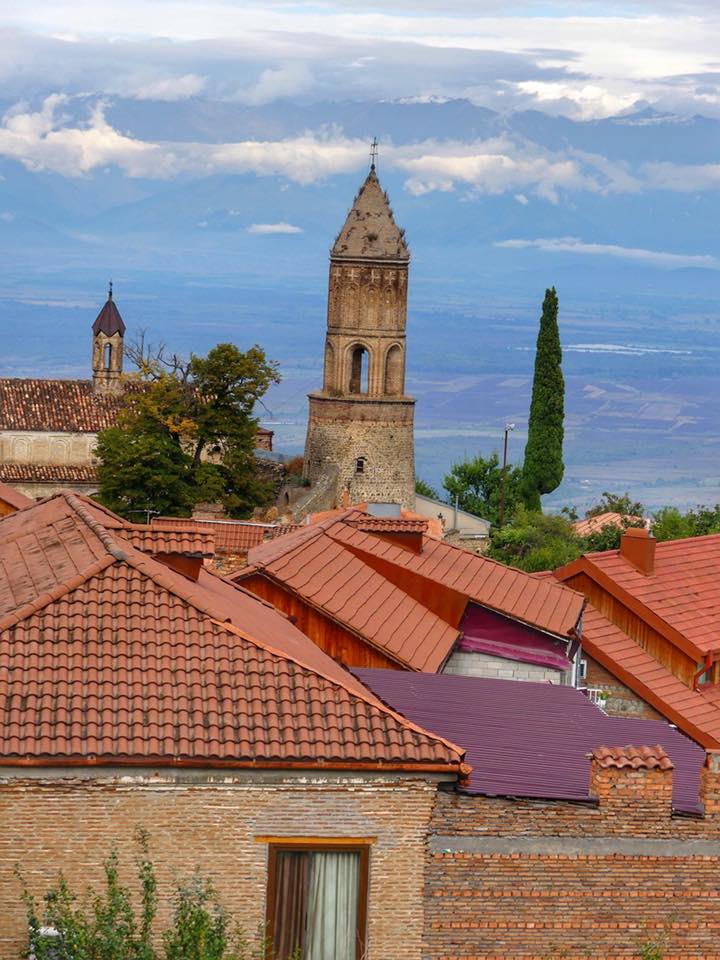 Oh and guys make an effort to learn and understand the background and history of not only Signaghi but all the districts of Georgia because there is so much to learn about really!

We also stopped at Bodbe Monastery as this is one of those must sees for tourists. Once we arrived we saw local vendors selling souvenirs and handcrafted items and once you entered it was just green trees and flowers lining the church. 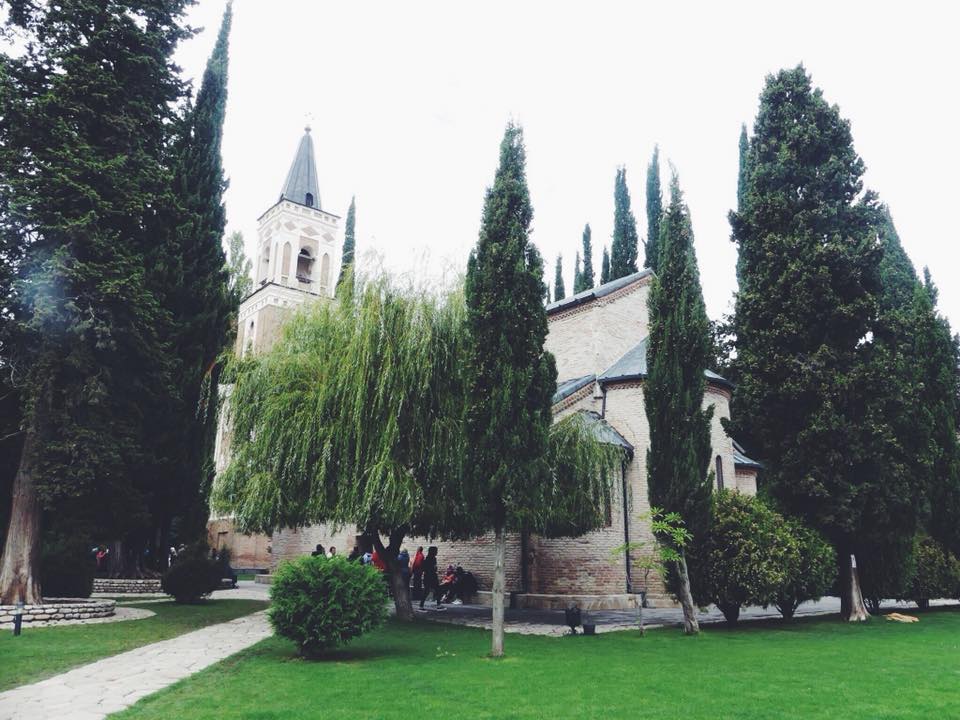 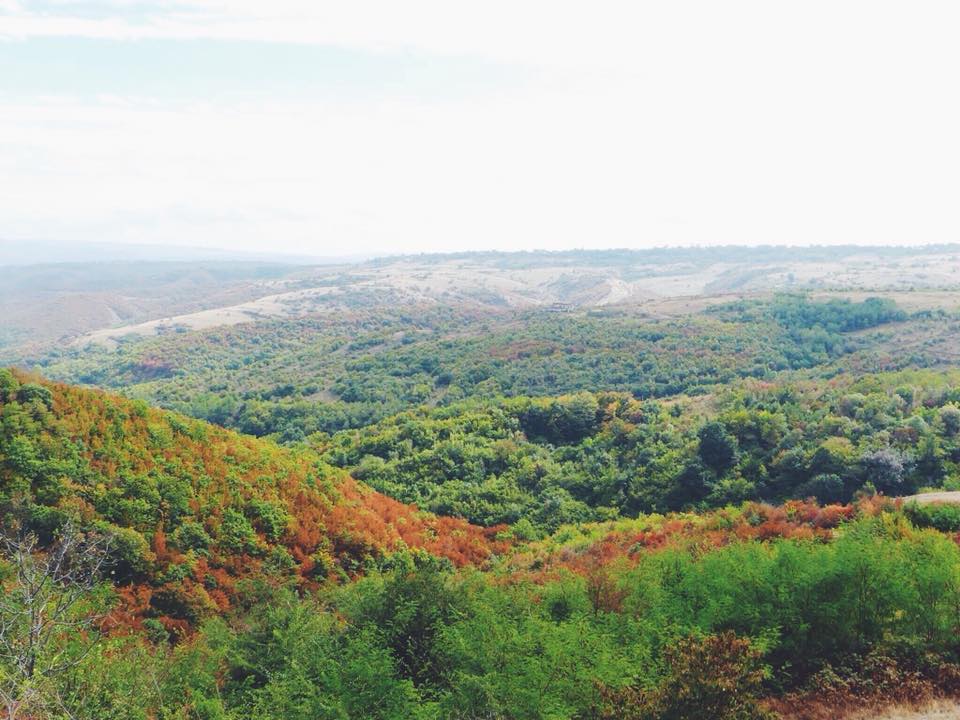 This monastery was actually devoted to St.Nino who was the man who brought christianity to Georgia and so the church is something you must see.

The inside walls are lined with paintings of stories from the Bible and candles and religious books and other items. Just so you know, ladies you should be dressed appropriately and no photos are allowed once inside.

We found ourselves building up an appetite and so we stopped for lunch and a beautiful restaurant right next to The City Wall and yes the food was tasty but the view was the highlight. 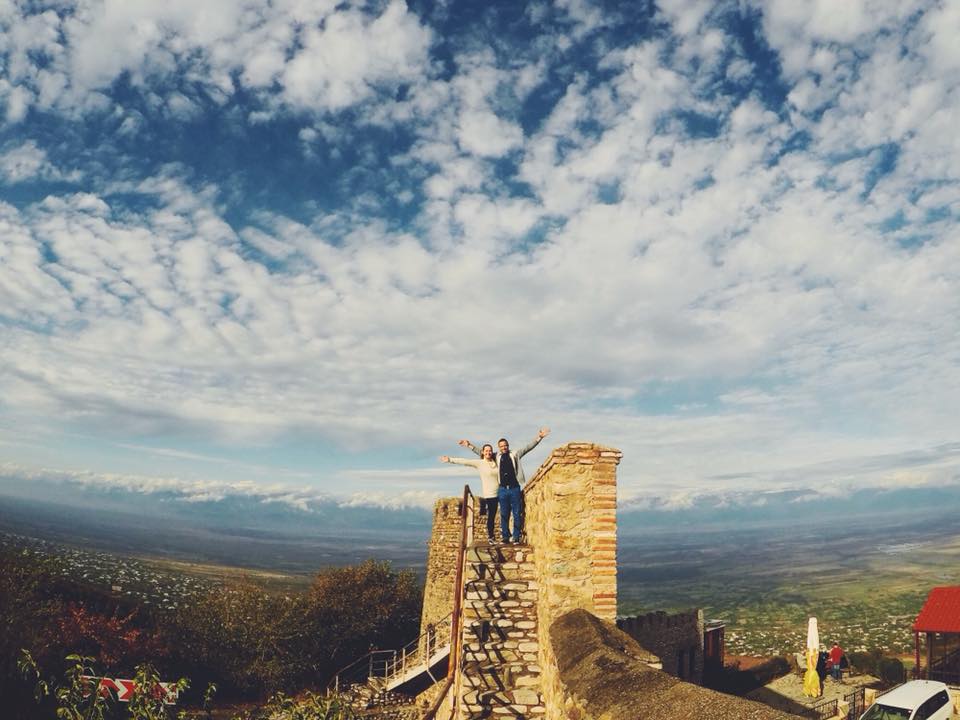 Speaking of the City Wall, this was spectacular to see, it reminded me very much of The Great Wall of China and there also is a part where you can walk on it yourself. 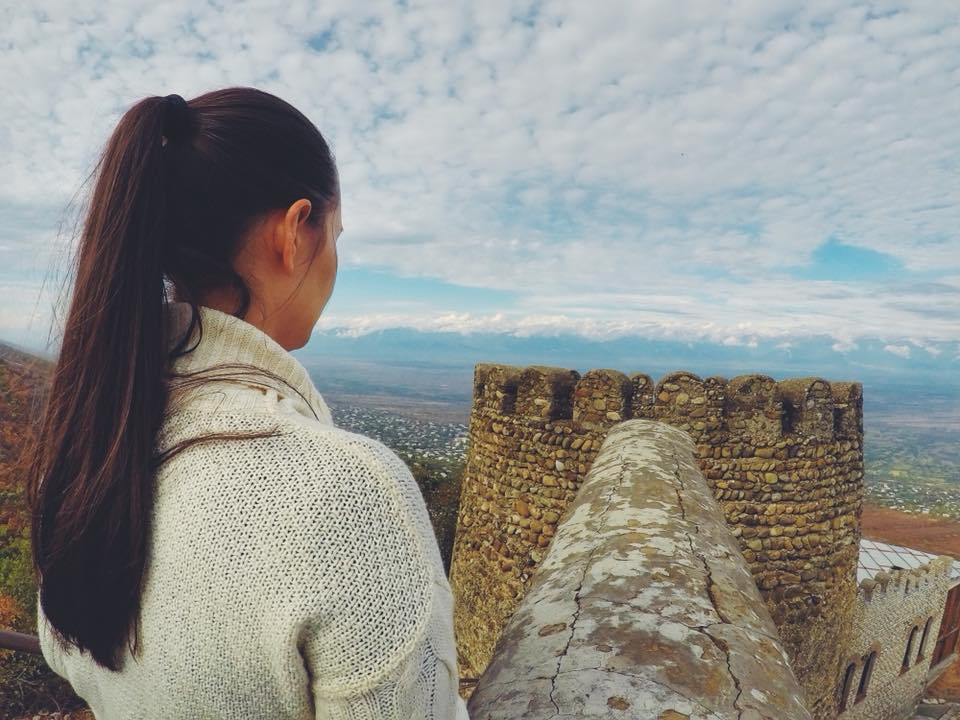 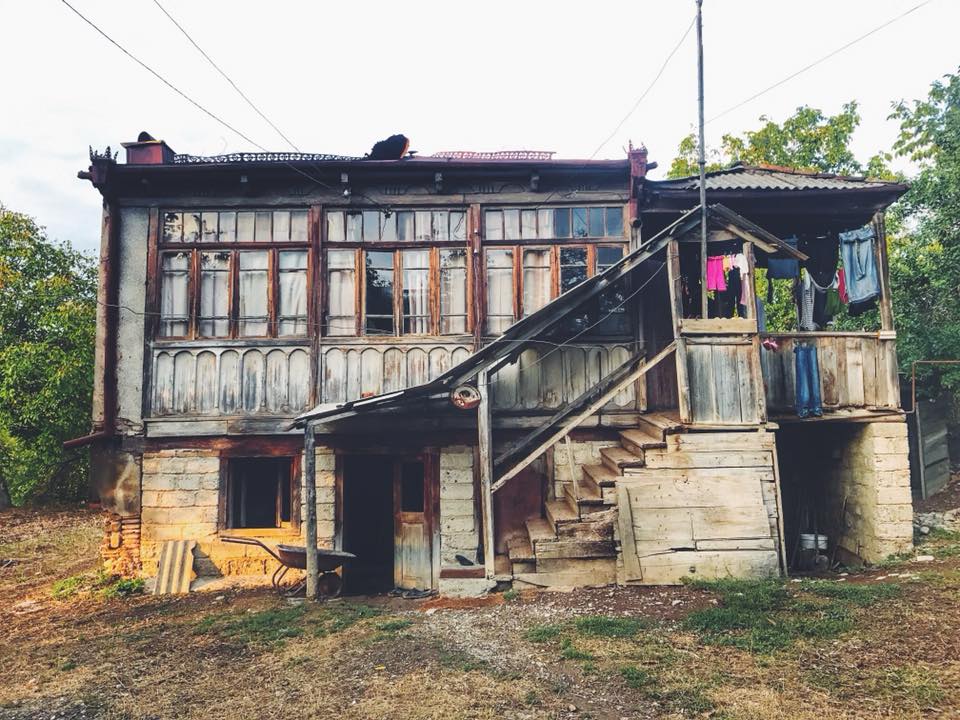 Before heading back to Tbilisi, we stopped at Akaki’s grandmothers house and friends house as he is originally from Signaghi and honestly this was the highlight of our trip. The people of Georgia are so kind and generous it melts my heart.

Their English may not be great but they make a huge effort to try and communicate with you and help you if need be.

Many times on our trip we met Georgians who instantly became our friends and it was small comments like, ‘ Welcome to Georgia and I hope you like my country’, this was said by the exchange man in the airport when we arrived and when he said it I looked at MA and was like, ‘ OMG that’s so lovely’. It’s the small things in life right?

The next morning it rained all day and although this might ruin many peoples holiday, it didn’t for us. MA and I actually love the rain and because we don’t get the rain ever in Dubai it’s actually exciting for us. 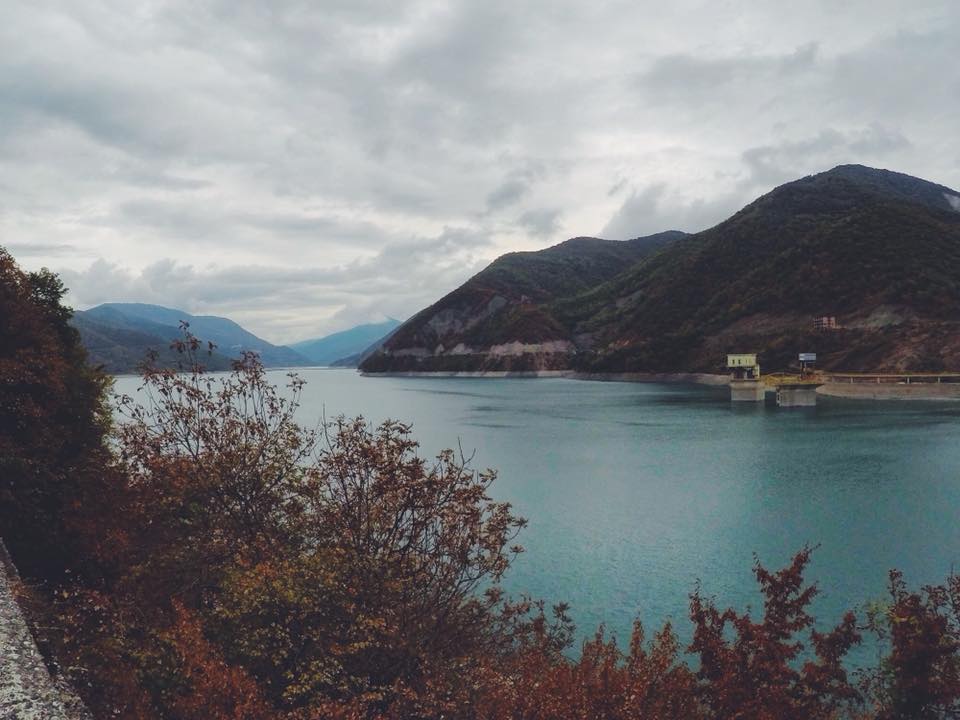 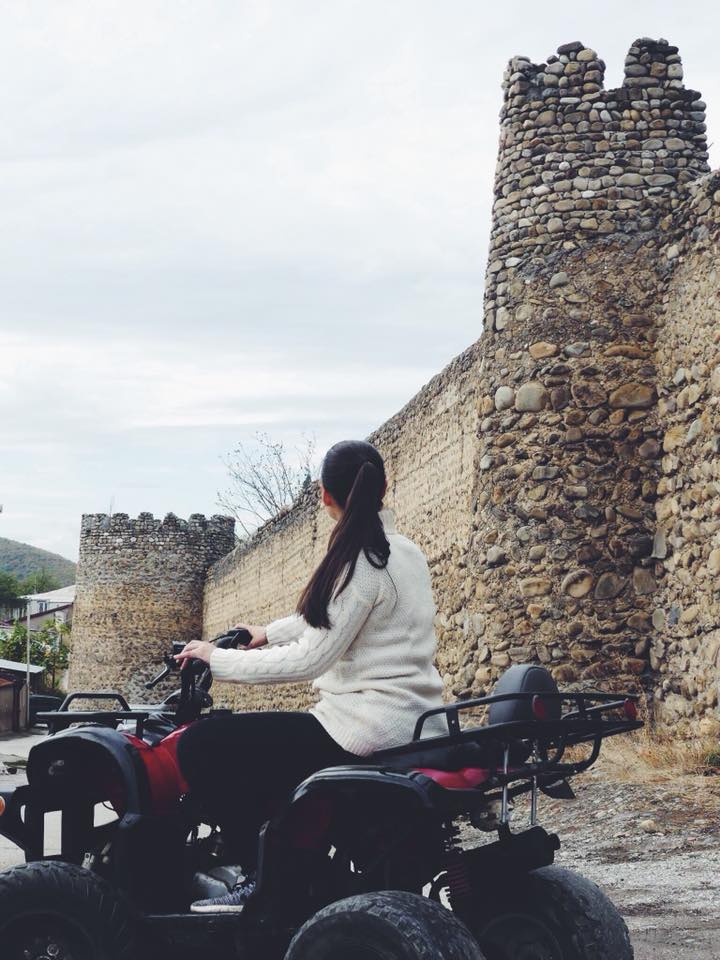 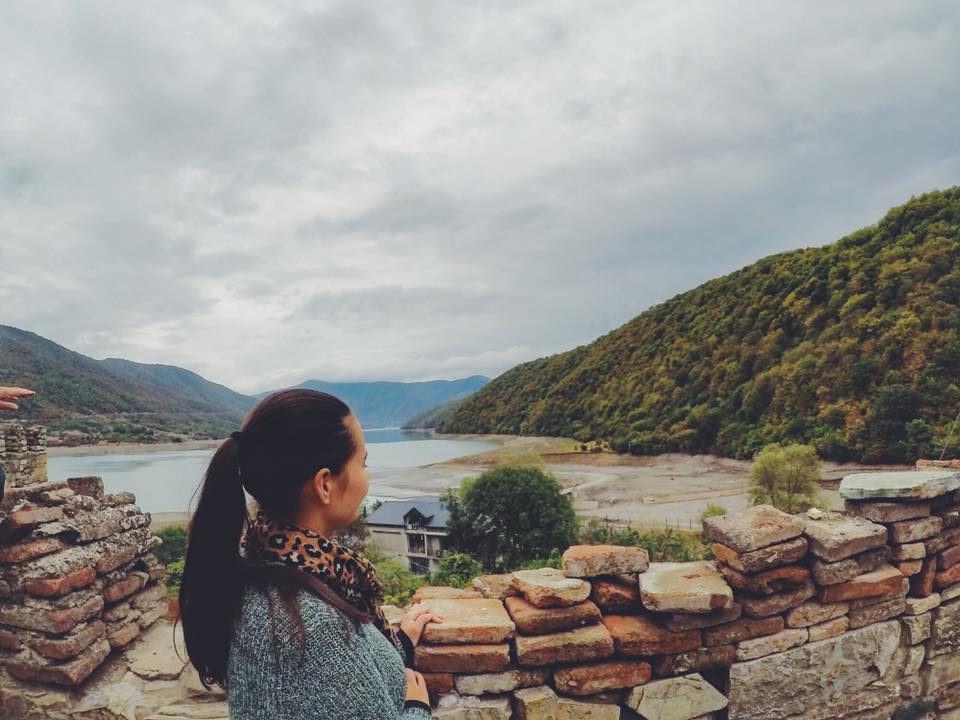 We got in the car and headed off towards an area called Ananoori where we got sweeping views of the valley covered in orange and red leaves with the Jinwali dam smack bang in the middle.

We stopped at many different fortresses and castles along the way which gave wonderful opportunities for photos and toilet breaks. 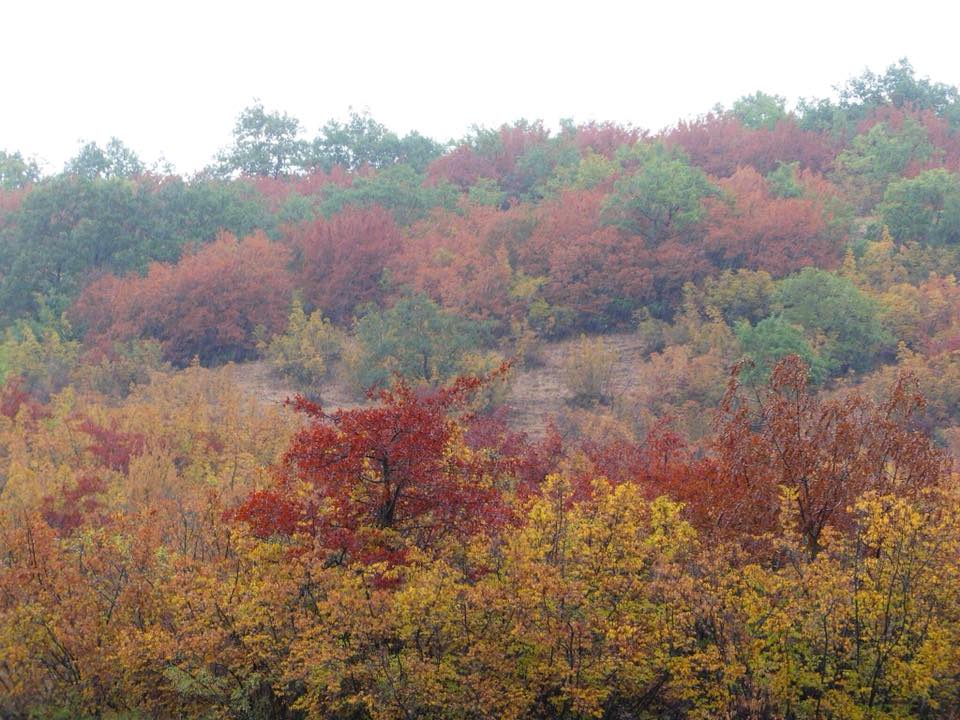 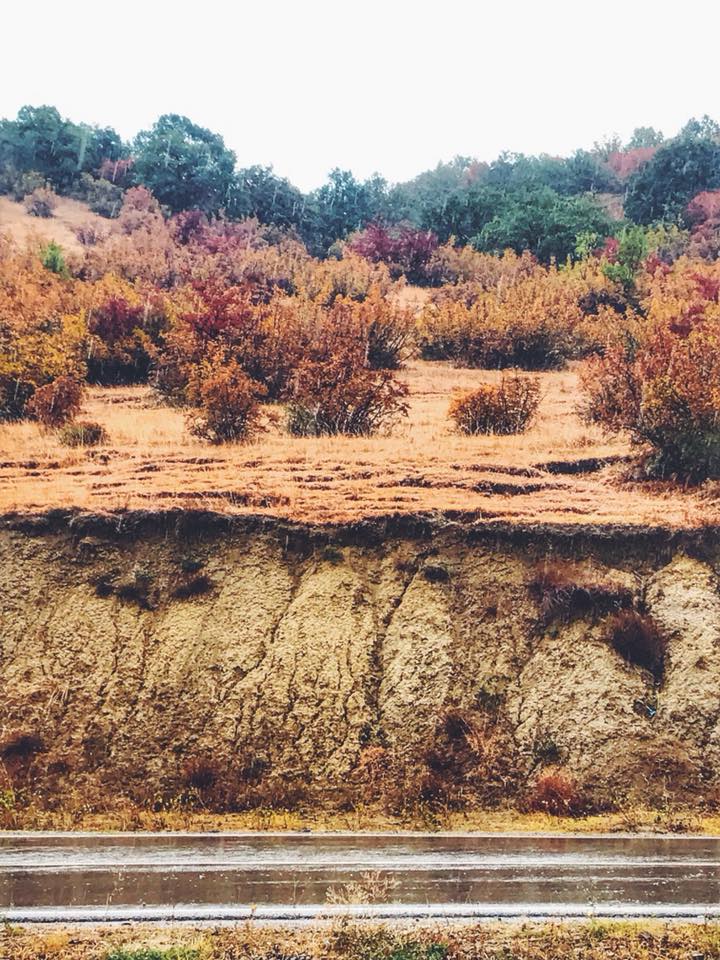 As we were driving along MA saw a small sign that said coffee and tea and so we stopped and found a tiny wooden hut covered with hay and straw on a hill in the middle of no where. The name of the owner is Gio, so he calls it Gio’s Herbal Tea and he is located on the Gombori Pass.

It was such a nice little stop to warm up with some tea and to chat with the locals.

Our last stop of the day was Kvareli Winery where we had a small wine tour and had a delicious lunch before the long drive home.

Our time in Georgia was way too short but I’m so glad that we at least got a taste of what Georgia has to offer and trust me, there is a lot to see and do! Next time we want to visit in Winter to do some skiing but visiting in the Summer would also be great! 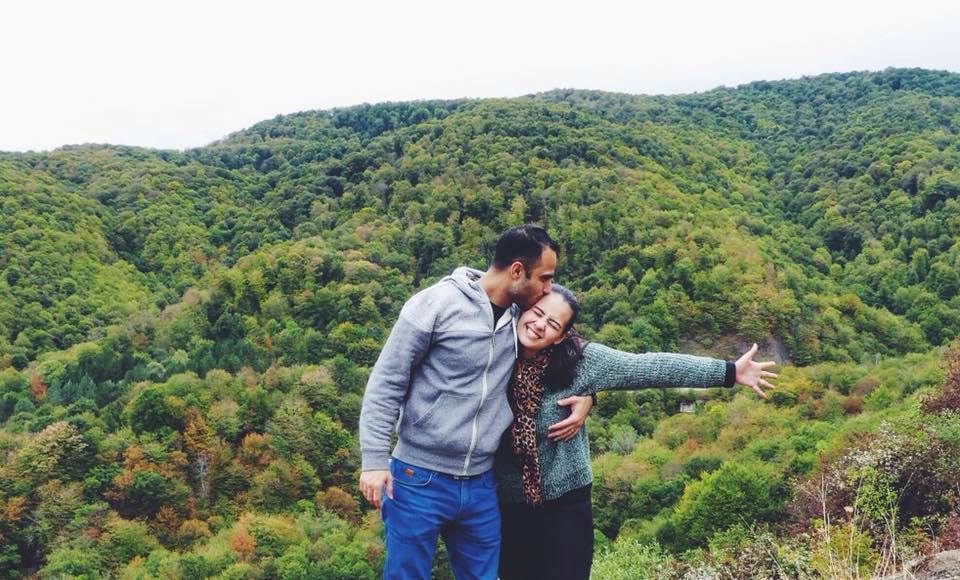 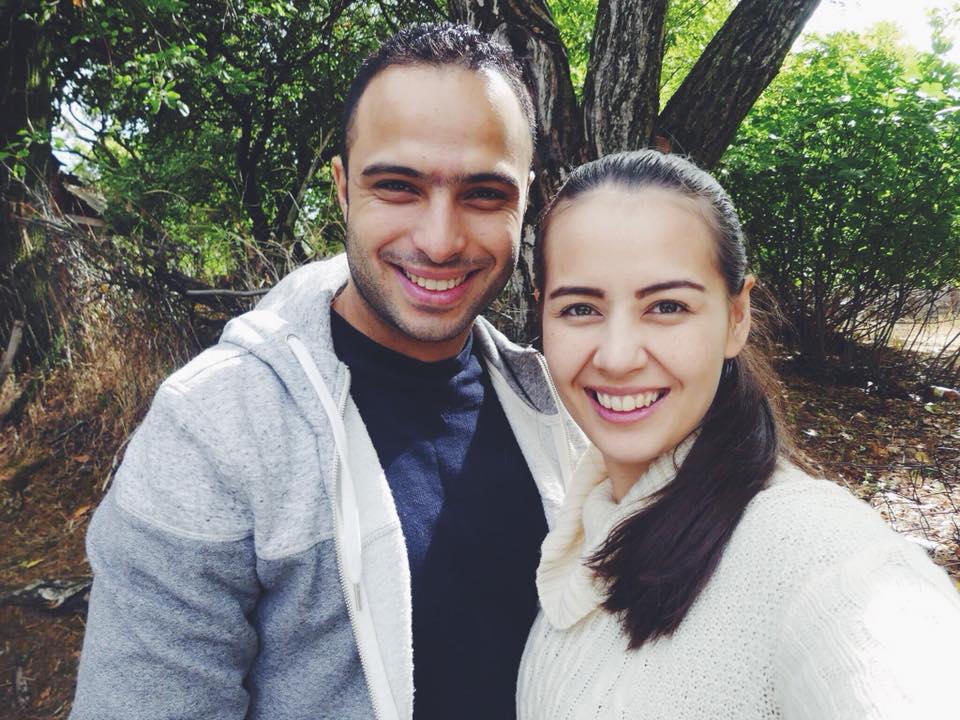 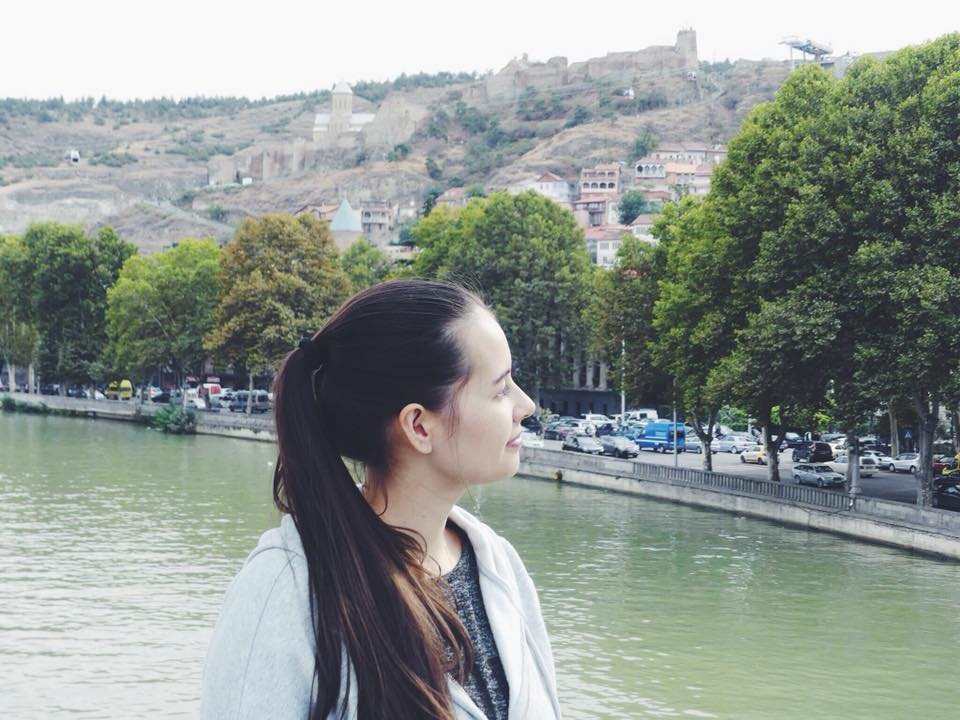 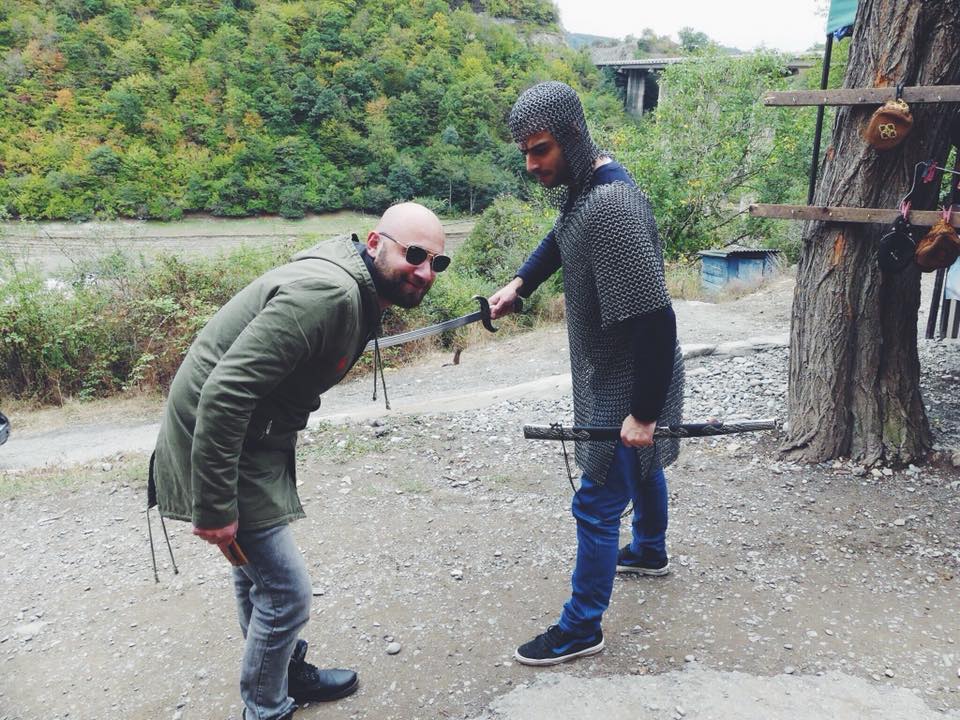 Make sure you check out WOC if you decide to visit and they can hook you up with some awesome tour guides, maybe even Akaki himself! http://worldofcrew.com

I’m actually off to New York right now so stay tuned for that!

Until then stay safe everyone!