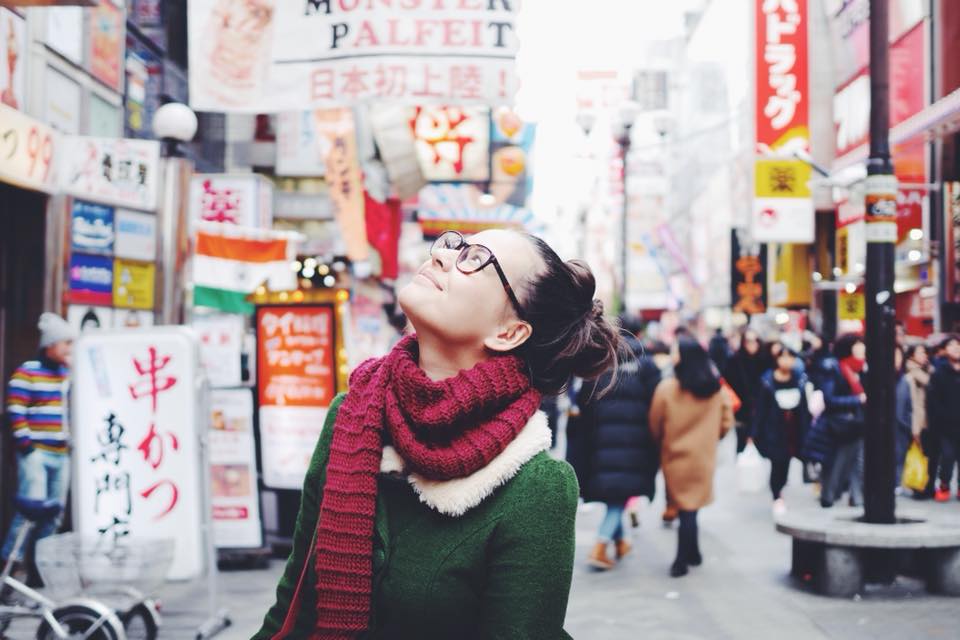 So I just landed back into Dubai from Osaka, Japan and I am seriously contemplating persuading my husband, Mum and Dad to go on holidays there in 2018. 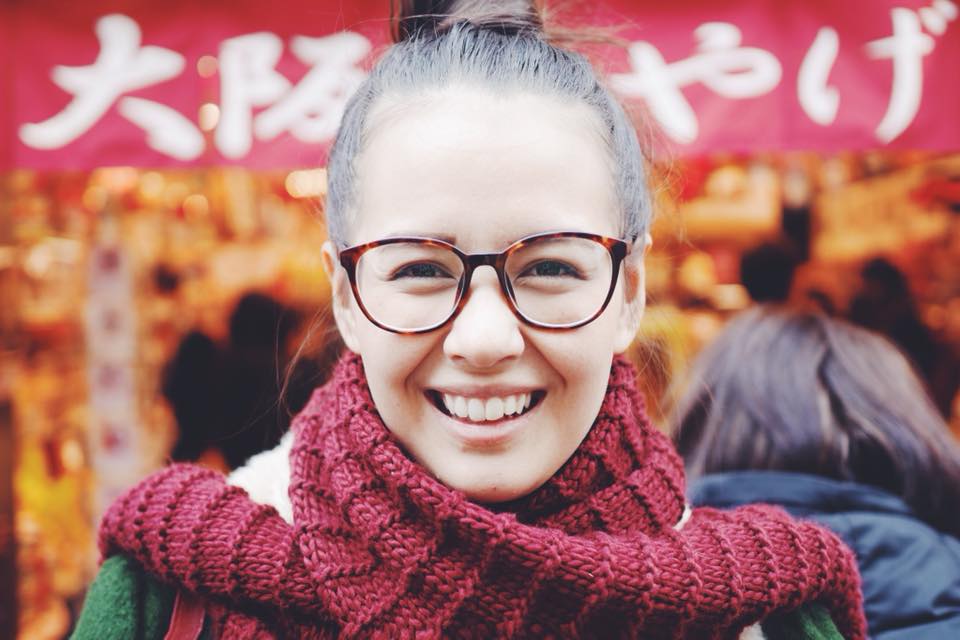 I have actually visited Japan on holidays before but I love it so much that I would do it again in a heartbeat.

The flight over to Osaka was a night flight so it was a struggle to get through it but it was also quite busy so the customers kept us awake. 😉 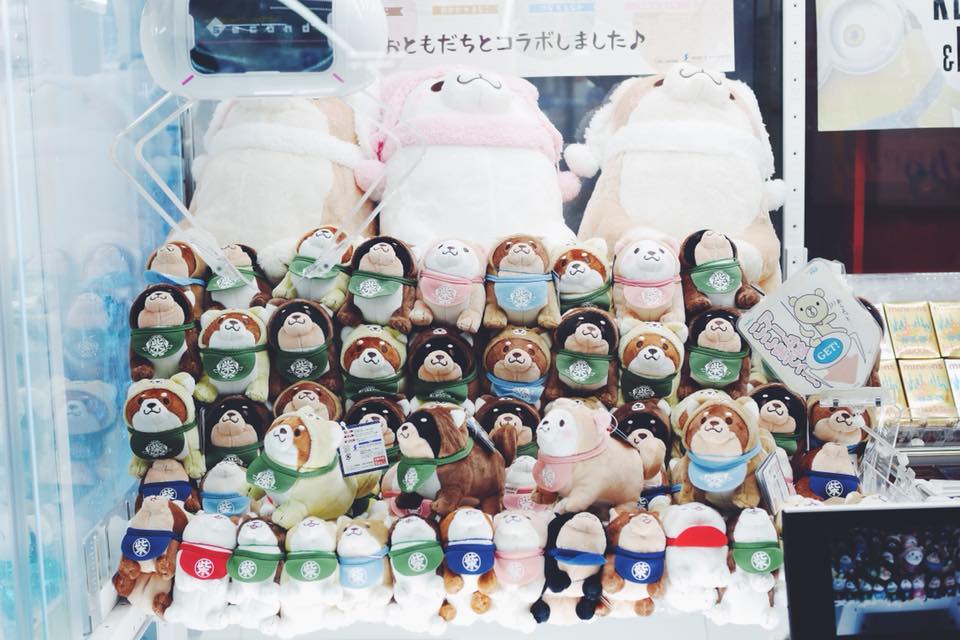 Once we landed we caught the hotel shuttle bus to Osaka Station and grabbed some scrumptious sushi for dinner, before heading back to the hotel to get some well needed sleep before waking up to head into Dotonbori.

On our journey back to the hotel we got lost in the maze of subway lines underground and so we asked a lovely Japanese lady and man for directions, and after trying to figure out how to show us the way on her phone they said that will take us there themselves.

Now I have written about the kindness of Japanese people before and this just goes to prove that what I said is true. They will go out of their way to help you with whatever they can and no where in the world would someone do this especially in this day and age. 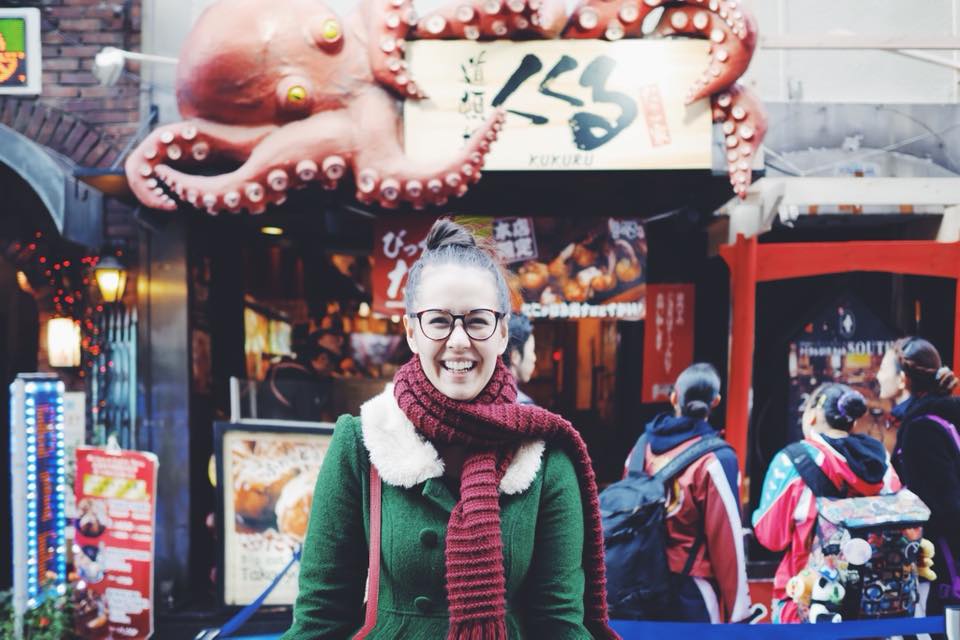 For those of you who don’t know Dotonbori is one of the main touristic destinations in Osaka which hosts an array of restaurants, food stalls and Japanese sweets shops. It also is where you can see the famous Glico running man which is an icon here in Osaka. 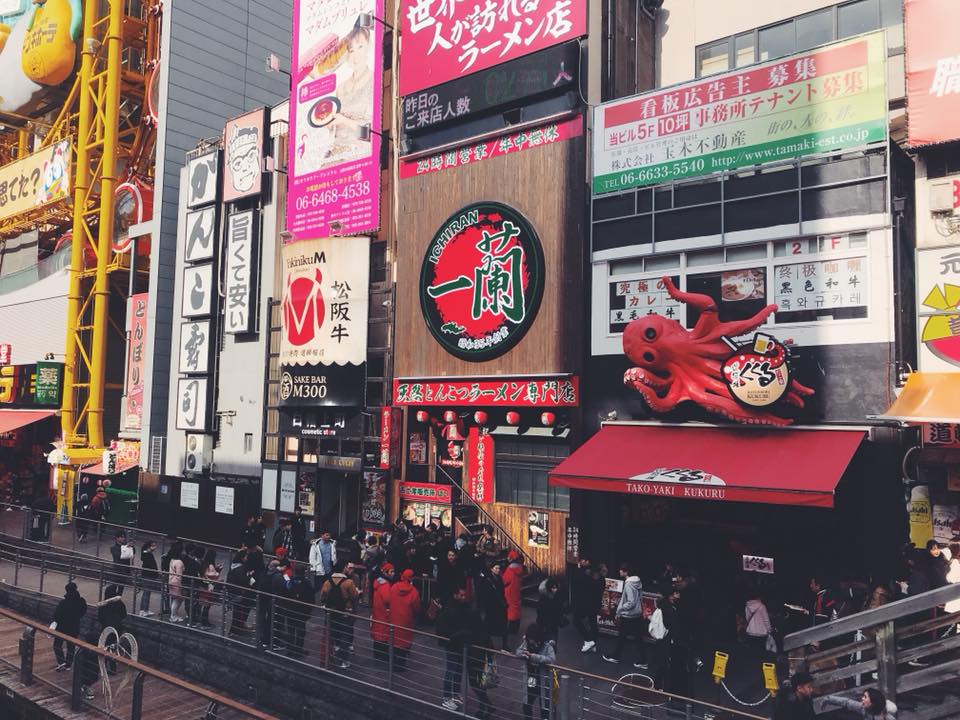 Myself and P’thoon who is a lovely Thai crew member also on my flight, headed off to the city at 10am and first thing that was on our mind was, yes you guessed it … food.

Luckily for me, she also has a passion for food and so we got along tremendously well and actually it was one of my best layovers yet, we ate, shopped, talked about our lives together and took some great photos which is all thanks to her by the way.

Majority of the photos you will see in this blog were taken by her and she is truly a talented photographer so I know you will love them! 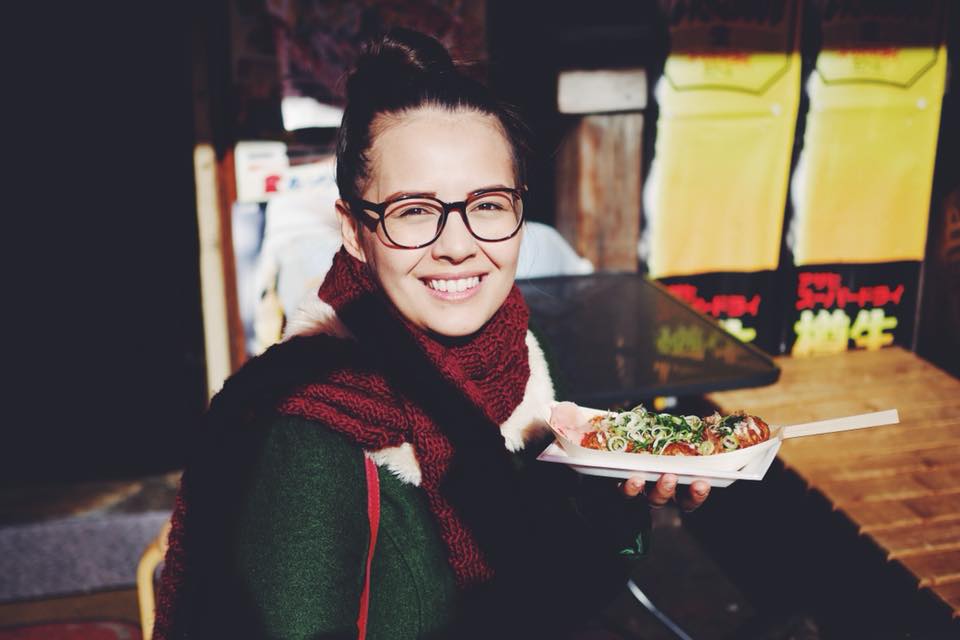 So our first meal of the day was ramen … which is that famous Japanese dish consisting of wheat noodles, thick and salty broth covered with various vegetables, dried seaweed, memma and either sliced chicken or pork. 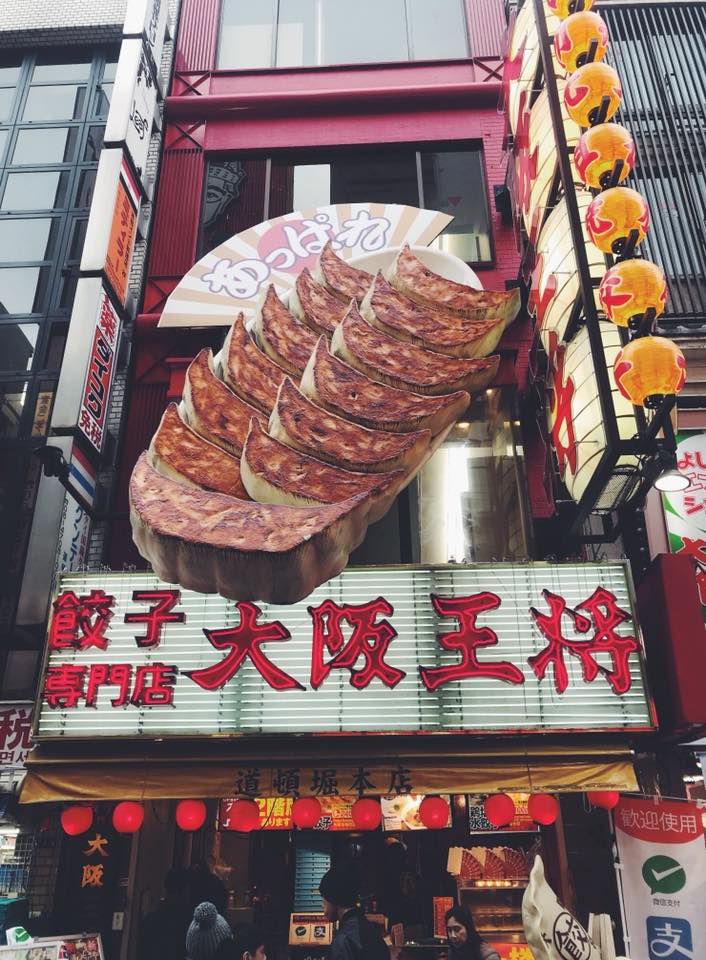 We selected our order outside of the restaurant on a machine similar to that of an ATM, took the tickets it gave us and handed them to the waiter who quickly ushered to our seats in the corner of the restaurant.

We got a huge bowl of ramen and also a dish of gyoza which were perfectly made. And within twenty minutes we were semi full and ready for our next food stop of the day. 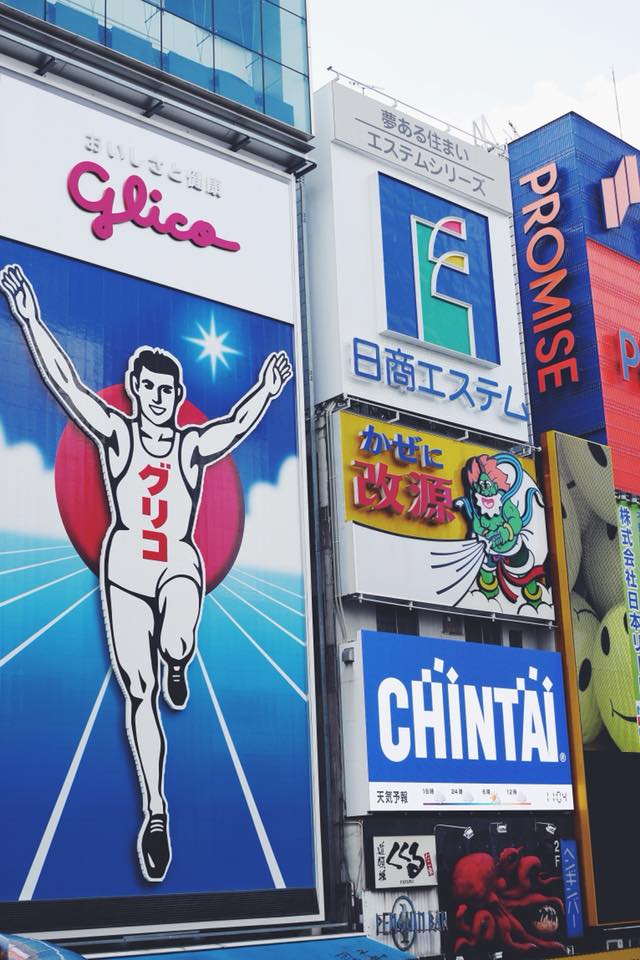 We quickly went to see the famous Glico man to get some shots and then waited in line for my absolute favourite thing in the world … TAKOYAKI!

So some quick history on Takoyaki, it is the food representative of Osaka which is why as soon as you step foot into Dotonbori you will see endless food stalls and restaurants serving up these delicious balls of goodness. 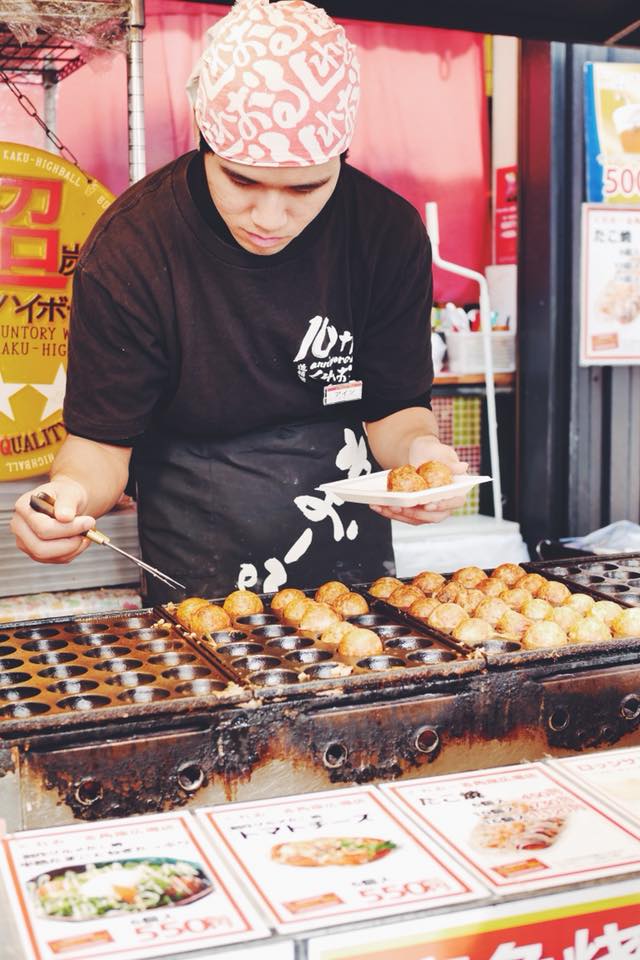 Takoyaki is a kind of round, fried ball made from wheat flour which has pieces of cut up octopus inside of it. It is then drizzled with Takoyaki sauce, mayonaise and sliced green onions.

The highlight of the dish, ( in my opinion ), is dried bonito shavings, which sway in the heat from the Takoyaki itself so it looks like they’re alive! 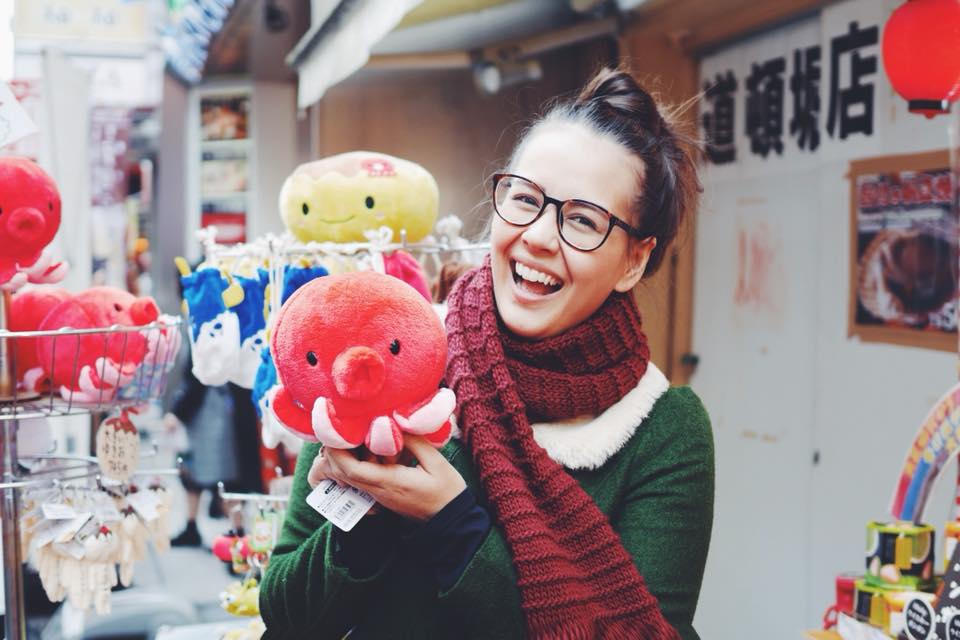 Anyways, we got one serving of them and shared as we were still full from the breakfast we had a mere twenty minutes ago and they were so so delicious! We downed them with a glass of coke and I laughed as I watched P’thoon hold her face as she fight through the heat of eating one whole Takoyaki in one go. 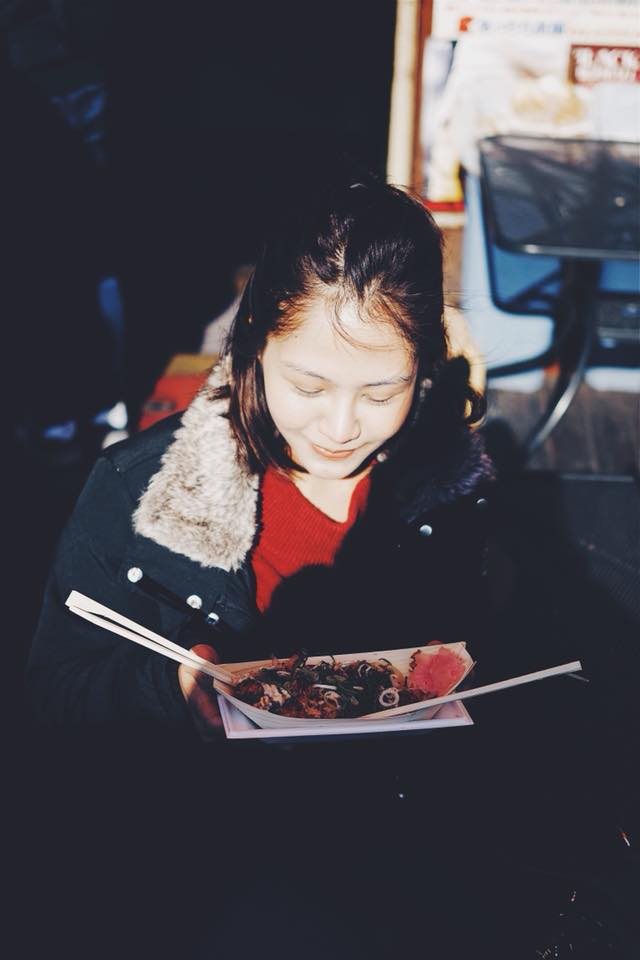 Rule number one of eating Takoyaki: pierce them with your chopsticks first before you eat them to release the heat because they are beyond hot and will seriously burn you.

We continued walking around the side streets and alleyways and did some sweets shopping in the many stores surrounding us. It is truly amazing to see what they have!
From matcha flavoured everything to Takoyaki flavoured Pringles, Japan has the perfect sweet or snack for you!

We were craving something cold to drink even though it was freezing outside, so we decided to take a seat in Honolulu Cafe accompanied with two tall glasses of Matcha Frappes. 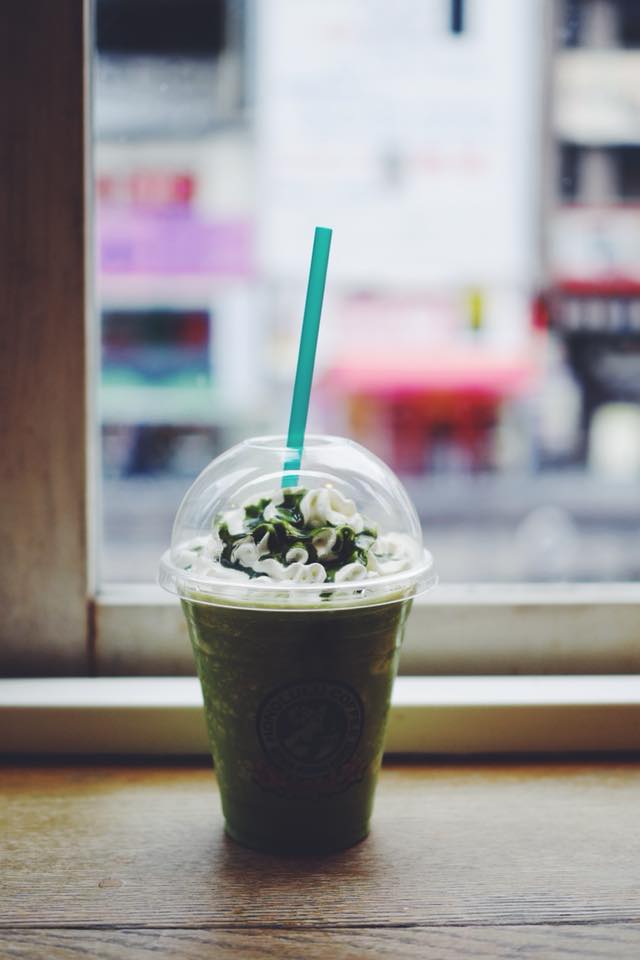 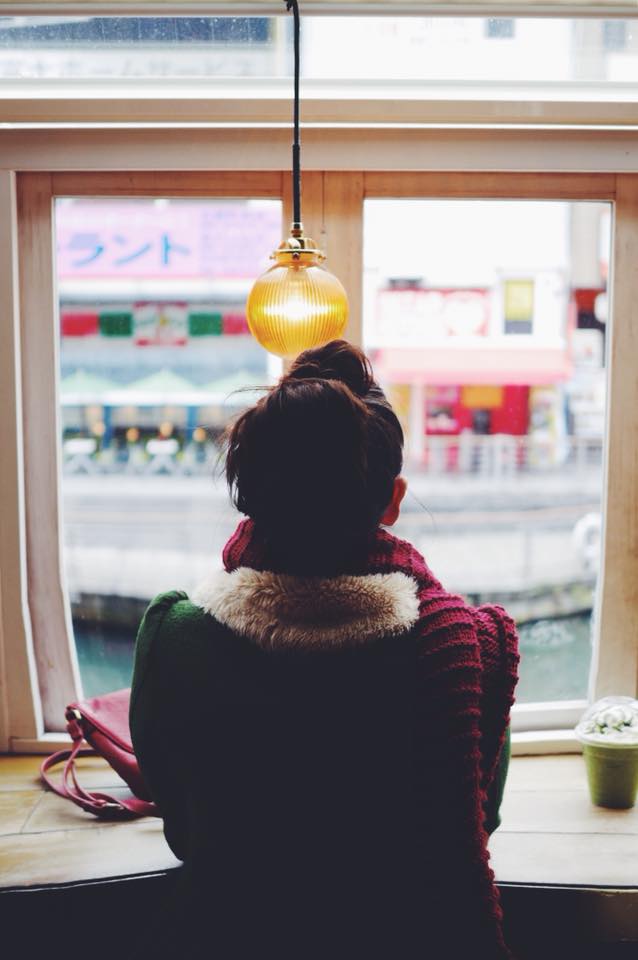 We took this time to take in the small view that the cafe had, take some more photos and talk some girl talk. 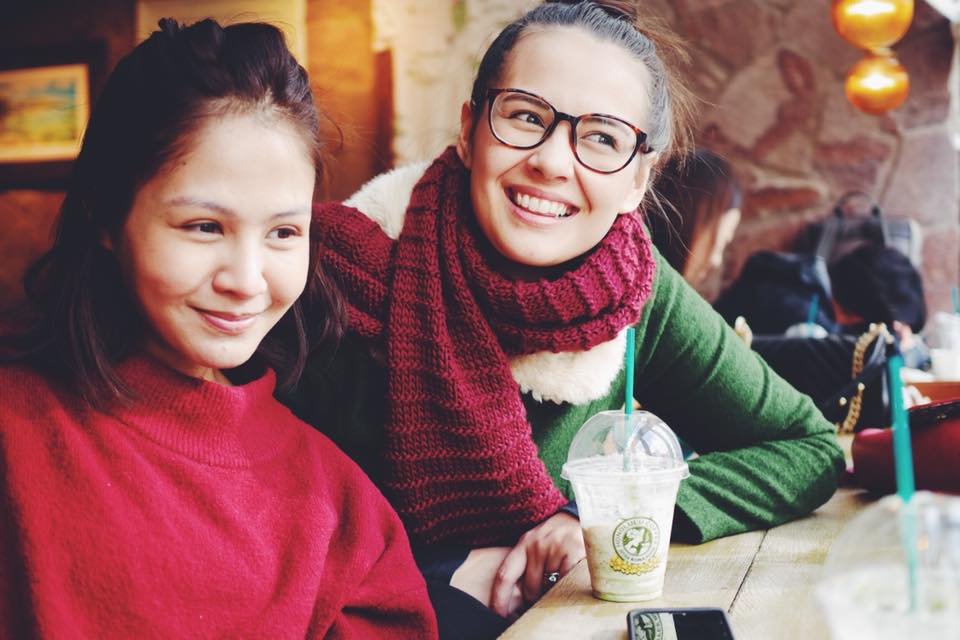 By then it was almost three in the afternoon and so we had to round up our day before we had to fly back to Dubai the same night, so we made one last stop on our food tour and found a wonderful authentic sushi shop on the corner of a beautiful side street covered with Japanese signs and banners. 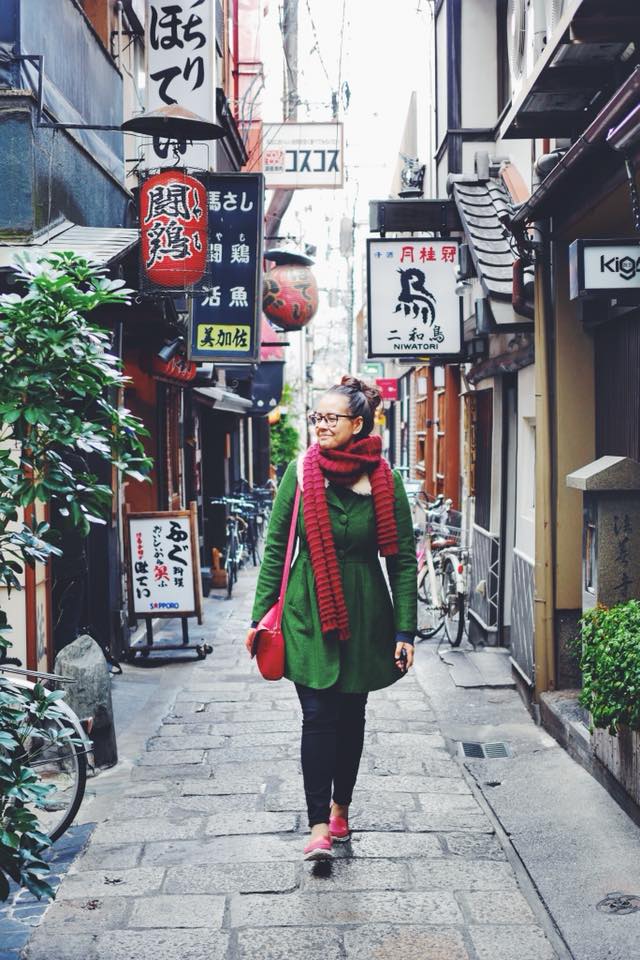 We actually don’t know the name of the shop as everything was written in Japanese but oh my god, it hit the spot.

It was a tiny hole in the wall shop with two sushi chefs, one waiter and eight stools in front of the sushi bar, but it was just right. 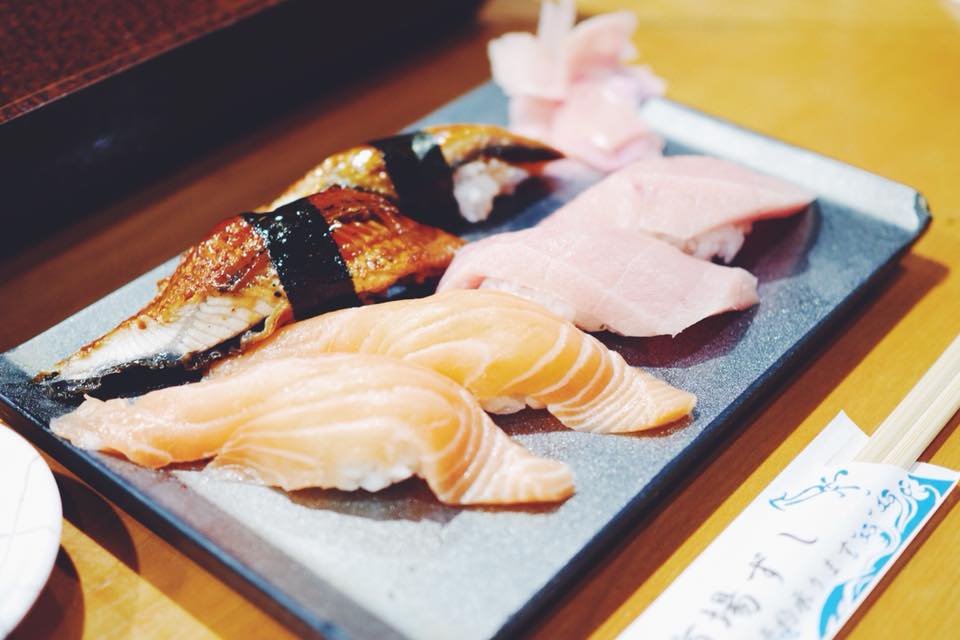 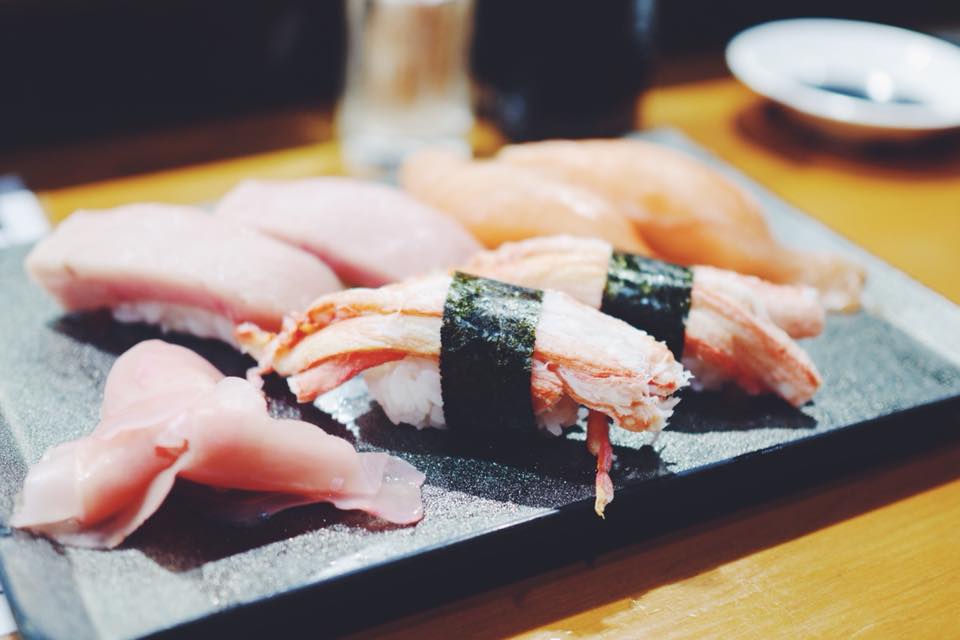 We ordered salmon, fatty tuna, crab claw and unagi nigiri sushi and it was just perfect. The seafood hung over the rice which was perfectly seasoned and it just melts in your mouth. It reminded me of Tsukiji Market and the sushi I had while I was there. 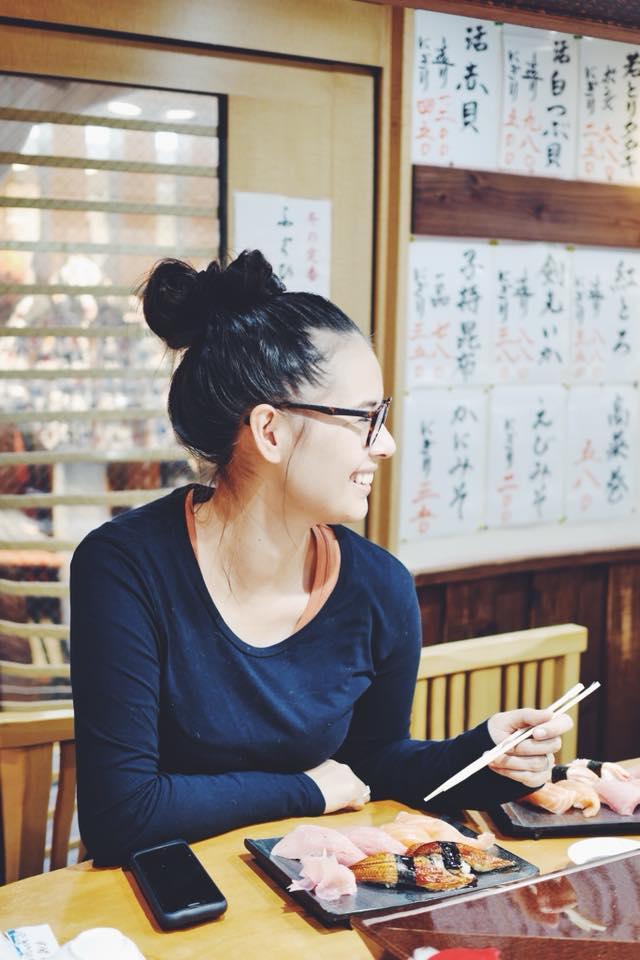 Bellies full of food we got back on the train to the hotel and the train that we happened to be on had heat insulating seats which I thought was just incredible! Only in Japan would they think of such a thing. 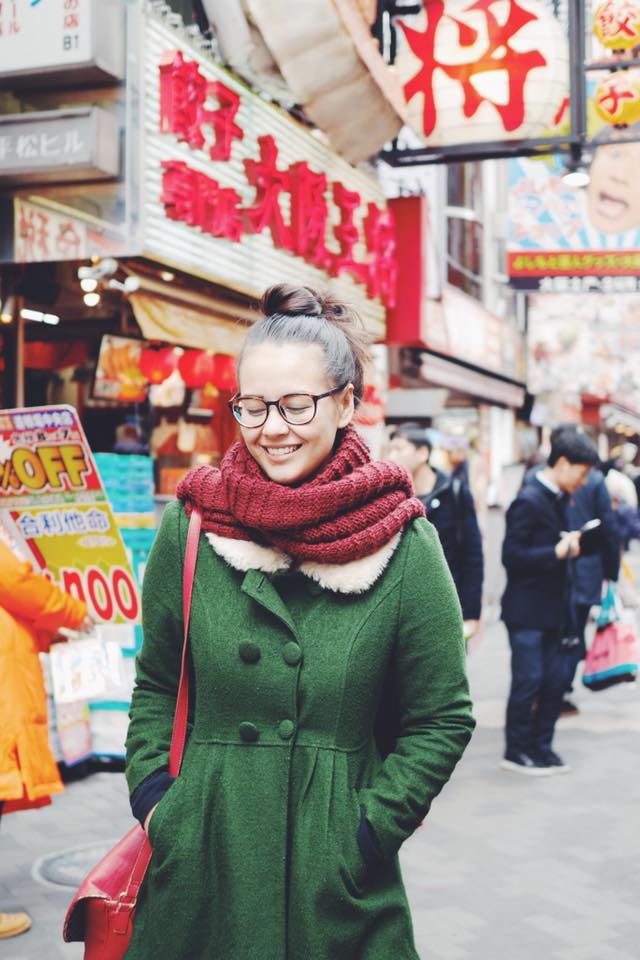 So this was my short but amazing layover in Osaka, it really revived my love for Japan and I’ll let you know when I successfully persuade my family to visit Japan again!

Until then Happy New Year to all of you guys! I hope 2018 brings nothing but happiness and prosperity to all of your lives and your family and thank you so much for always following my adventures around the world. God bless you. 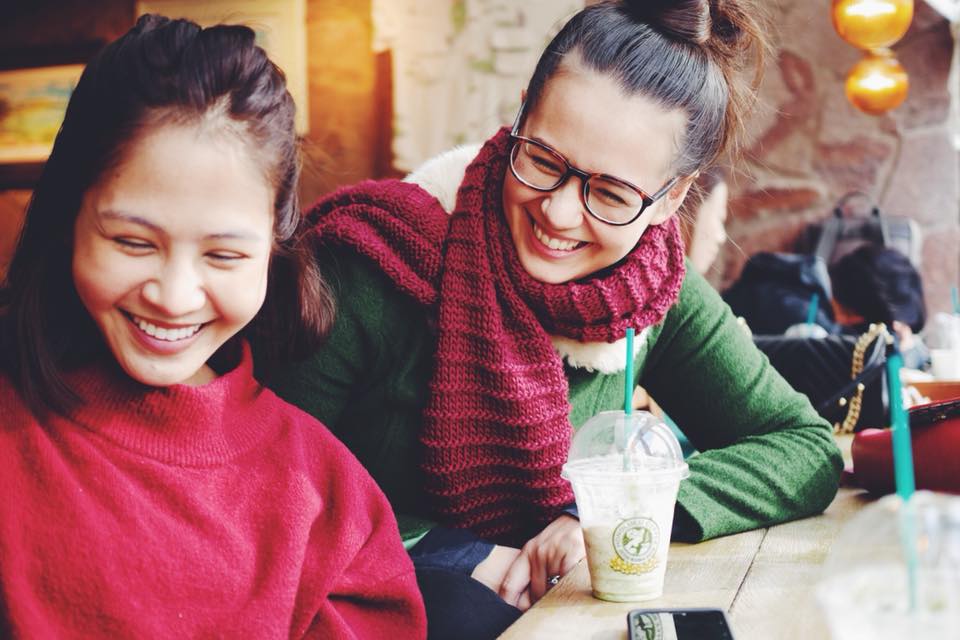